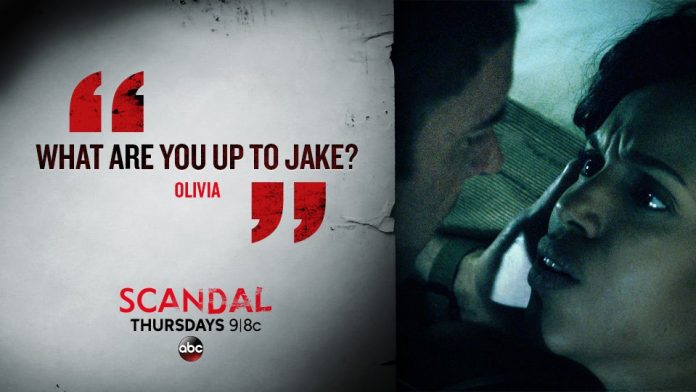 In the upcoming episode for season 5 of ABC’s “Scandal,” Olivia Pope (Kerry Washington) will get sidetracked while someone from the Gladiators seemingly turns into the dark side.

The promo for episode 14 titled “I See You,” opens with the voiceover saying, “Lying, Spying and Vying for power.” Olivia then states to Abby Wheland (Darby Stanchfield), “You wanna be the White House chief of staff?” to which the she quipped with, “I wanna run that mother.” Even though Abby is not working as a Gladiator, it is believed that Olivia still thinks that she will always be part of the group. Olivia then warns her, “Once you take the white hat off, there will be no turning back.”

The footage also shows Abby giving Cyrus Beene (Jeff Perry) a picture from the funeral of Governor Vargas’ (Ricardo Chavira) daughter. It seems like the latter is surprised that his plans have been figured out.

Meanwhile, Olivia will be spying on Jake Ballard (Scott Foley) as she believes that he killed somebody to become the new head of the NSA. The clip features Jake with his girlfriend, but looking at a hidden camera Olivia presumably installed in his apartment.

Moreover, as the professional fixer is busy with her activities, the Gladiators have to look after themselves. Susan Ross (Artemis Pebdani) and Mellie Grant (Bellamy Young) will be feeling the pressure of their campaigns heating up. Viewers may remember that in previous episodes, President Fitzgerald Grant (Tony Goldwyn) chose to endorse Susan over his ex-wife.

Fans may also expect a blast from the past that will surprise everyone while down the road, Mellie will have a very public faux pas and it will be up to Olivia to fix it. There may also be more information revealed about Jake’s new love interest.

New episodes of “Scandal” air every Thursday at 9 P.M. EST.