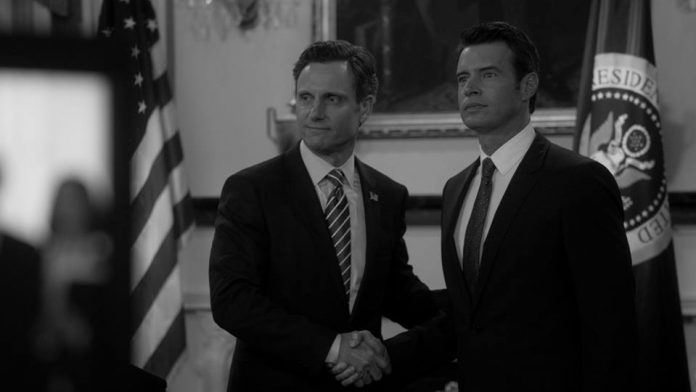 Olivia Pope’s (Kerry Washington) professional life is as interesting and complex as her personal one. And when these separate worlds collide, things in “Scandal” get a lot more complicated. Scott Foley, however, decided to simplify things for the loyal fans by declaring that the “fixer” has chosen his character Jake over outgoing president Fitz (Tony Goldwyn).

“I’m going to be very unpopular in saying this: I think Olivia has chosen Jake,” Foley straightforwardly told Natalie Abrams of Entertainment Weekly. “There is no question in my mind that she’s chosen Jake. Proof of that for me is the day he was going to get married. They concocted this plan, they were going to be together, he was going to leave [his fiance] at the altar until Rowan (Joe Morton) threatened Olivia with Jake’s life. She had to have that really heartbreaking speech to him where she said, ‘I don’t love you, I never loved you, I love Fitz.’ It was very apparent to me that she wanted to be with Jake and she couldn’t.”

While Foley’s explanation is very valid and that Liv’s talk with him was undeniably touching, fans of the show know that nothing is set in stone with regard to “Scandal.” It can be remembered that things have been looking up for the president and Liv. Around the same time, she was far removed from Jake more than ever. Unfortunately, Liv’s bubble with Fitz quickly burst when the public started accepting their affair with the former feeling trapped in her new role. They eventually ended up separating ways in a very ugly manner when Liv decided to move forward with the abortion of their child without Fitz knowing.

Since then, the narrative of “Scandal” season 5 delved more on the upcoming election with Liv ending up working with Mellie (Bellamy Young), and her on-and-off involvement with Jake.

Coming into its sixth installment, the political thriller has delayed its comeback to work around Washington’s ongoing second pregnancy. During the actress’ first pregnancy, “Scandal” opted to play around with camera angles to hide its lead star’s baby bump. But despite the move, creator Shonda Rhimes hinted that along the way, Liv will eventually experience motherhood.

Instead of its usual premiere at the start of the 2016-2017 television cycle, it will commence during the midseason of the forthcoming TV year.