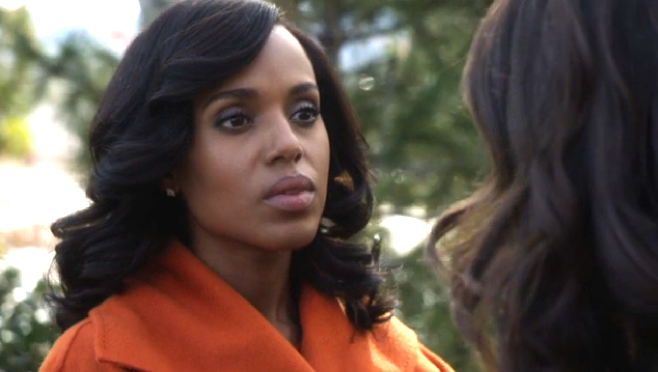 Coming from a bloody episode last week, “Scandal” will go on a two-week hiatus to have everyone cope with the events in “Thwack.” However, when the show resumes, fans can expect a bolder Olivia Pope (Kerry Washington) as she is forced to once again push her limits to stop what Jake (Scott Foley) and Rowan (Joe Morton) are planning.

The latest episode of “Scandal” saw the political fixer use her own hands to murder former vice president, Andrew Nichols (Jon Tenney) in a very violent way hitting him with a metal chair until he died.

“I will say I was as shocked as you were, so everybody just breathe,” Washington told E! News when she was asked about her thoughts on her character’s recent doings.

Nichols was arguably one of the most disliked characters in the drama given that he orchestrated the abduction of Olivia in an effort to have Fitz (Tony Goldwyn) launch a war with West Angola to save his lover. However, Liv may have been pushed over the edge where there is no turning back.

Fans can expect to see the aftermath of the crime when “Scandal” airs “Til Death Do Us Part” next week as spoilers suggest that Liv will go out of her way to foil the plans of her father and Jake. In a promo clip released for the upcoming installment, Liv will try to stop Jake from marrying Vanessa by trying to reason out that he really does not love her. Unfortunately for her, it looks like the wedding will push through as a snippet of a wedding ceremony was shown.

The Futon Critic published the official synopsis of the show which reads, “As Olivia deals with the aftermath of what she’s done, she finally finds out what exactly Jake and Rowan are plotting. But with their plans already in motion, Olivia is forced to make a gut-wrenching attempt to try and stop it. Meanwhile, in flashbacks, we learn more about Jake’s past and how he first got involved with B6-13.”