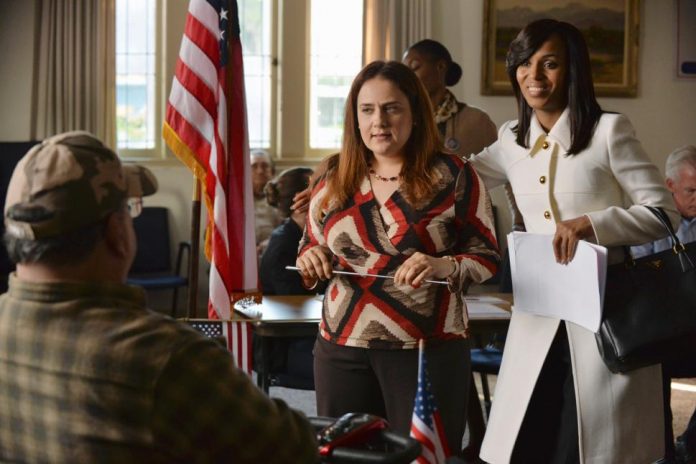 Olivia Pope (Kerry Washington) gets deeper into Mellie’s (Bellamy Young) presidential bid as she prepares to strike back against one of the opponents of the former first lady in the all new episode of “Scandal.”

This week’s episode titled “The Miseducation of Susan Ross” will see Olivia and the rest of the gladiators cracking an intel’s authenticity that can potentially be damaging for one of Mellie’s rival, which Carter Matt revealed to be Susan Ross (Artemis Pebdani).

In the end of “Pencils Down,” Pope had a trade off with Alex Vargas (Danny Pino), who in turn gave the professional fixer a bombshell against Susan.

Pino previously revealed to TV Line that what he gave to Olivia is “something that will have repercussions for Susan Ross politically andpersonally. It is the kind of thing that when you find that out, you would read it in a tabloid and think that it’s not true.”

Whatever it is, it is still very important that OPA makes sure that whatever they are going to release will be airtight as Mellie no longer has the luxury to make a mistake in her campaign given her recent faux-pas, which Olivia tried very hard to fix.

In this week’s “Scandal” episode round-up by series stars Scott Foley and Joshua Malina for Entertainment Weekly, Foley pointed out that Mellie’s campaign appears to be struggling to take off given her image despite all the help that she got from Olivia.

“Mellie’s campaign seems to be having a hard time finding its footing. Between the way that Mellie is viewed by the public, and her inability to counter that image no matter how hard she tries, it’s a compelling story, and seeing her deal with it gives me the ability to feel… compassion? For her. So strange,” Foley pondered.

Elsewhere in “Scandal”, David (Joshua Malina) tries to cope with the realization that his dating life just crumbled in front of him, while Cyrus (Jeff Perry) continues to work alone to push his personal political agenda.