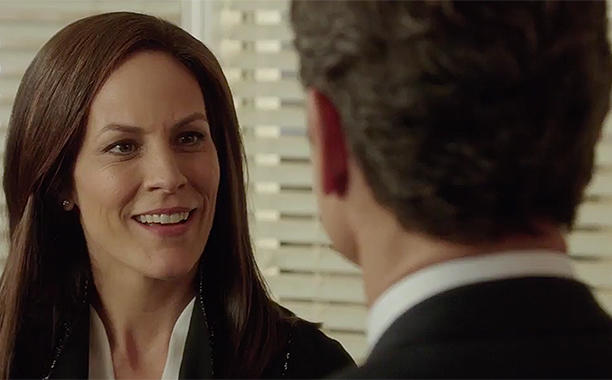 Before “Scandal” came back after their mandatory break over the holiday season, fans have seen Fitz (Tony Goldwyn) at his lowest with Olivia (Kerry Washington) aborting their child and then leaving him. Now, three episodes into the second half of its fifth season, it looks like the exiting POTUS has already gotten out of the rut he has been stuck in, thanks to journalist Lillian Forrester (Annabeth Gish).

The “Scandal” newbie recently sat down with TV Line to talk about her controversial role which made her “the most hated woman in America.” She described her character as “Smart. D.C.-savvy. Very put-together, like all of Shonda [Rhimes]’s females are. And spicy. Like, shes not one-note.”

Knowing what the President was willing to go through for Liv, does Lillian realize the possibility that she may just be a rebound? Gish revealed that with her character being a journalist, she is built to be perceptive but that does not change the chances that she might really fall for Fitz, granted that she already has a crush on him.

“There’s obviously chemistry between them, and I think it’s genuine. She has to make a decision about whether or not she wants to do her piece… or date the president,” Gish added.

Finally, the “X-Files” alum is not shy to tease that there might be more “hot and steamy LilliFitz,” but whether she has a hidden agenda or none is left for the audience to decide.

Olivia, on the other hand, is busy rekindling her relationship with Jake (Jack Foley) while still running OPA. But while she would have like to keep it to themselves for a while, the two will be busted when Huck (Guillermo Diaz) accidentally bumps into Jake on his way out of Olivia’s apartment.

In the next episode titled “The Fish Rots from the Head,” the imminent will already happen as the on-and-off again couple, Fitz and Olivia, is slated for a word war. Carter Matt reports that as the President spirals into a new affair, Olivia will be returning to the White House to knock some sense into him. The promo trailer shows Olivia calling out Fitz’s actions but the former is clearly angry.

Catch all the action in “Scandal” airing Thursday nights on ABC.

'Outlander' season 2 spoilers: season switches between Paris in first half...