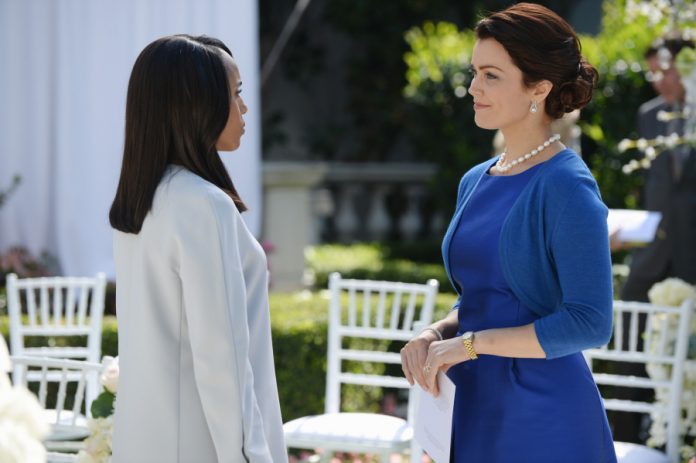 “Scandal” came back with a bang last week, and things will only get more complicated as the series goes on for the rest of its fifth season.

Next episode, titled “The Candidate,” Olivia (Kerry Washington) will come to a crossroad when former First Lady Mellie (Bellamy Young) seeks for her help.

Rumored plot details suggest that although Mellie has taken the first step to go to Liv, the junior senator from Virginia may not yet be so sure on whether she will let her ex-husband’s former mistress run her campaign. However, as Susan Ross (Artemis Pebdani) is closing in on her and trying to take her position, Mellie will be at a spot where she will be devising something big just to keep everything under her control. On the other hand, Liz (Portia de Rossi) continues to coax Susan into running for president.

Elsewhere in the show, Abby (Darby Stanchfield) and Cyrus (Jeff Perry) will face a crisis as a profile piece on the President comes into question. While there is yet to be any other information regarding the piece, it was revealed that the President was already stressed out.

“Fitz is alone really for the first time in his life so he’s coping with that and that’s not easy,” Tony Goldwyn who plays President Fitz Grant explained. “And [he’s] trying to work on his legacy. That’s pretty much where we find us.”

In a separate interview with the 55-year-old veteran actor, he also shared some tidbits on his upcoming directing gig for the hit Shonda Rhimes show. When pressed what he thinks is the most difficult thing in both acting and directing, Goldwyn points to co-star Washington.

“She loves to tease me mercilessly, especially when I direct,” Goldwyn said. “So I’ll come up and go, ‘Kerry, that was so great, but maybe if we try it this way…’ and she’ll go, ‘Blah blah blah.’ Or it’s like you’re doing a love scene and I’ll be like, ‘I thought we would kiss here,’ and she’ll be like, [gag noise],” he added laughing.