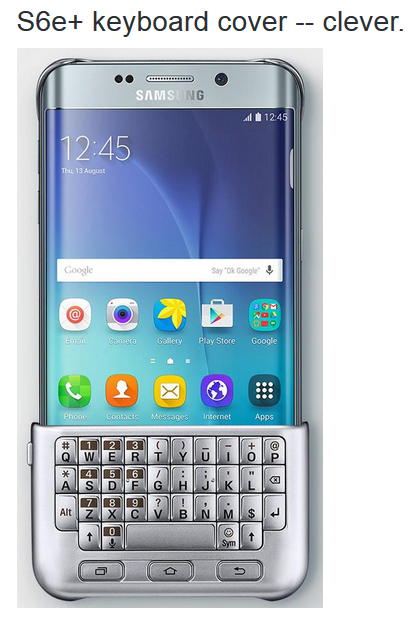 With only two days away from its official launch, additional last-minute leaks are still coming in for Samsung Galaxy S6 Edge Plus. These rumors might have a higher chance of truth since as insiders are peering more and more into the device.

For one, the People’s Edge feature from its predecessor S6 Edge is expected to be updated with a second menu in order for the user to add their five favorite applications, along with five preferred contacts slated on the side for faster launch. Aside from this, S6 Edge Plus is also anticipated to come with an “On Circle” menu, which enables the user to quickly connect either through calling, messaging, emailing, video chatting, sending a picture, and sending an emoticon.

Along with these new features, the handset is said to have a clip-on accessory of slider keyboard similar to the older Galaxy Pro models, while its back home and menu buttons at the bottom similar to older PDAs and Blackberry phones. The keyboard will be sold separately. In the website of Dutch retailer Central Point, it is sold for $65.60, together with other accessories such as ClearView cover, Glossy Cover, and a Flip Wallet.

Samsung is set to unveil S6 Edge Plus along with Samsung Note 5 on the Unpacked 2015 event in New York on August 13. The handset should become available from August 21.

Xiaomi Mi MIX vs iPhone 7 Plus: Comparison of specs, features,...