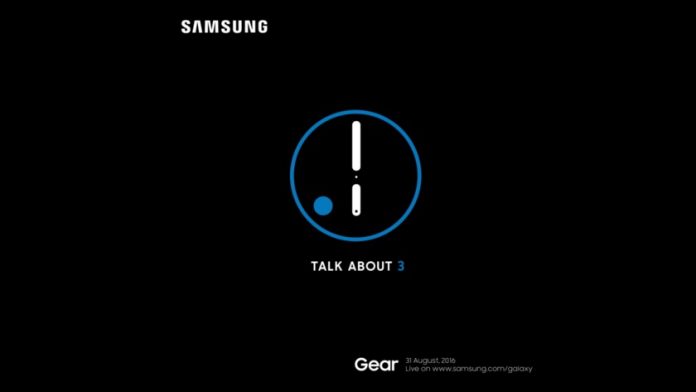 The much-awaited smartwatch from Samsung, the new Gear S3, could very well be revealed to consumers on Aug. 31 in a special launch event, as the new teaser that was sent out by the South Korean tech giant practically confirmed that the long rumored wearable device would finally see the light of day and will soon be available to users.

In a recent report, it was revealed that Samsung had sent out press invites for an upcoming launch event on the said date, just before the upcoming IFA 2016 event kicks off, where Samsung is also confirmed to be attending. The said promotional image bears the caption saying: “Talk About 3.”

While the teaser image is quite vague on its own, the lower part of the invite had the “Gear” branding on it, which have led to people expect that it is indeed an invite for the launch of the new Samsung Gear S3 smartwatch.

Not much is known about the new smartwatch by the South Korean tech giant, but it was rumored that the Gear S3 would be having multiple variants once it releases. There is the Gear S3 Classic, the Gear S3 Explorer, and the Gear S3 Frontier editions. Each variant of the device is aimed at a particular type of user which will cater to their specific needs.

At this time, it is unknown how much the Gear S3 smartwatch would sell for. It’s also unknown whether the device would be available for purchase on the same day it launches or if a certain period would be set so that consumers could first place pre-orders for it before releasing it in the market.