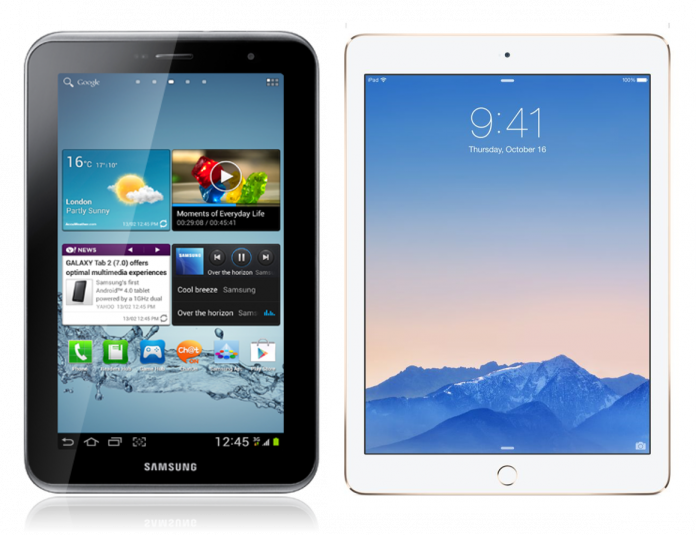 The battle of Samsung and Apple continues as the Galaxy Tab S2 and iPad Air 3 are placed head-to-head.

Samsung Galaxy Tab S2 is already in the market with its 9.7-inch and 8-inch screen options at 2048×1536 pixel Super AMOLED screen. The tablet runs on an octacore Exynos 5433 processor with 3GB RAM and options of either 32GB or 64GB internal storage.

For its camera, the rear shooter of th Samsung Galaxy Tab S2 is at 8 megapixels while its front shooter comes in 2.1 megapixels. Without a flash, the camera produces good quality for well-lit places. However, in darker places, the quality drops, according to a review made by Pocket Lint.

However, the real edge that Samsung’s Galaxy Tab S2 may have is its weight. The Air lineup from Apple is known for its lightweight and slim make-up, but the Samsung tablet also infused this for Galaxy Tab S2, making the device weigh 0.86 pounds and measure only 5.6 millimeters thick. Compared, to the Apple iPad Air 3’s predecessor, iPad Air 2, the iPad device weighs heavier at 0.96 pounds and 0.5mm thicker at 6.1mm.

At the moment, only rumors surround the iPad Air 3 as it is expected to be released in the first quarter of 2016. Nonetheless, there are speculations that Apple may address the slimness part and make the iPad Air 3 only 5mm thick. Meanwhile, others believe that it will keep the same thickness as the iPad Air 2.

As for other specifications, the iPad Air 3 is also expected to come at a 9.7-inch display screen with a possible higher resolution of 2334×3112 at 401 pixels per inch. With this, it may already have the capability of a 4K display. The much-awaited Apple tablet is expected to be powered by an A9X processor along with a 3GB or 4GB RAM. For the camera, the rear snapper is expected to be at 8 megapixels with iSight feature, while the front snapper may come in 2 megapixels.

In terms of cost, Samsung Galaxy Tab S2 can be purchased at $400, while the iPad Air 3 is expected to sell starting at $619.

While the iPad Air 3 is not yet in the market, fans will have to wait for its actual specifications and cost if they are seriously considering choosing between the two tablets.