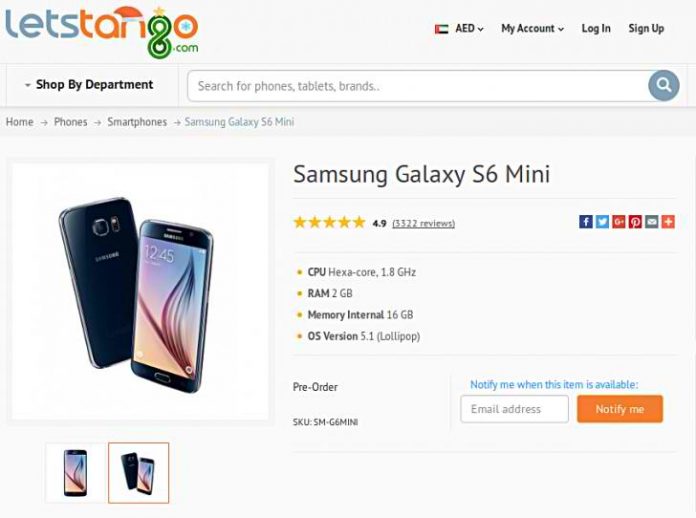 Before Samsung releases their long rumored new flagship series of smartphones, they might actually be expanding the current Galaxy S6 line of flagship phones, with a possible release of the long rumored Mini version of the Galaxy S6. A certain Samsung Galaxy S6 Mini has been spotted on a listing on a U.A.E.-based online retailer, sharing also a photo and the full specification of the device.

LetsTango posted a listing of an alleged Samsung Galaxy S6 Mini. The listing did not state the price or any other detail about the phone. However, it did list all the specifications of the device.

As per the listing, the Samsung Galaxy S6 Mini sports a 4.6-inch Super AMOLED display with Corning Gorilla Glass 4 protection. It runs under a hexa-core processor of yet unspecified brand, with a CPU clocking in at 1.8 GHz speed. For graphics, it comes with an Adreno 418 GPU. Seeing that it has Adreno 418 GPU, it could mean that the processor is a Snapdragon 808 one.

It packs 2GB RAM along with 16GB worth of built-in internal storage capacity. Just like its bigger sibling, the alleged Galaxy S6 Mini does not support external microSD expansion.

As for the camera, the device was listed to have a 15-megapixel main rear camera that is coupled with a 5-megapixel front snapper for selfies and similar purposes.

The device is powered by a Li-Ion battery of unspecified capacity with wireless charging features. It boots on Android Lollipop 5.1 with TouchWiz UI on top of it.

Samsung has yet to make an official announcement about the device.