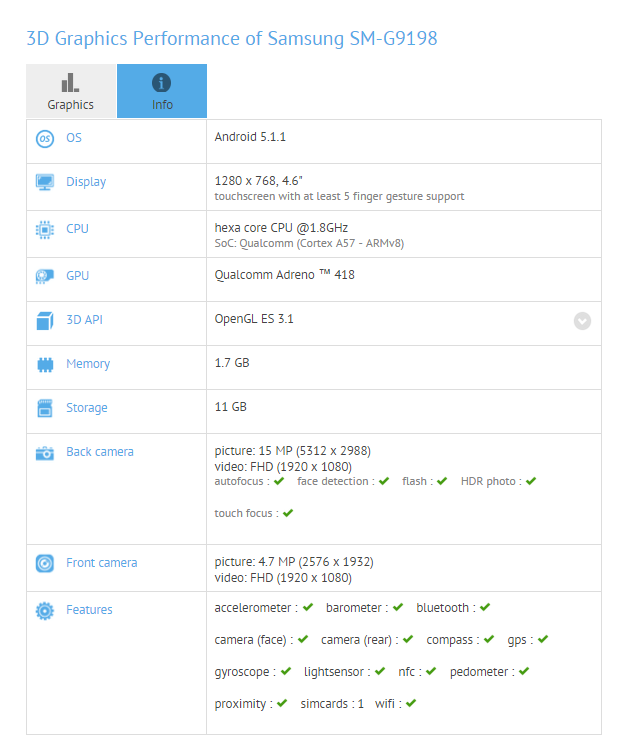 It has now become a trend for South Korean tech giant Samsung to have a regular follow up release for each of their new models for the famous Galaxy S line, called the S Mini. With this, Samsung’s current flagship, the Galaxy S6, is already expected to have its Mini version sooner or later.

Just recently, the alleged Galaxy S6 Mini surfaced in India, for its supposed testing period. According to a report by STJS Gadgets Portal, a Zauba report surfaced indicating that a Samsung mobile phone with a model number of SM-G9198 have had various deliveries of units meant for testing since April of this year, with the last one being on May 29. Zauba is a website that holds India’s database for import and export reports. This suggests that the rumored Samsung smartphone is already on its final stage of testing and may be released anytime soon.

In a previous report, a GFX Benchmark data was leaked for a Samsung smartphone with the model number of SM-G9198. While there is no official handset name released, users and analysts have assumed this is the long-rumored Galaxy S6 Mini.

According to the report, the SM-G9198 will be having a 4.6-inch screen with HD resolution (1280×768), with a multitouch support of up to five fingers. The device will run under a 1.8GHz hexa-core Snapdragon 808 processor, a significant upgrade form the usual Exynos for the Galaxy S Mini variants, with an Adreno 418 GPU. It is expected to sport a 15MP rear-facing camera with Full HD recording capability, and a 5MP front-facing camera also with Full HD recording capability. It will run on the latest version of Android Lollipop, v5.1.1. It will also have a 11GB (or presumably, 16Gb) worth of built-in internal memory, and 2G of RAM.

The rumored specification is indeed a significant upgrade from how the usual Galaxy S Mini model have gone, making the supposed S6 Mini another smartphone with premium level of specs.