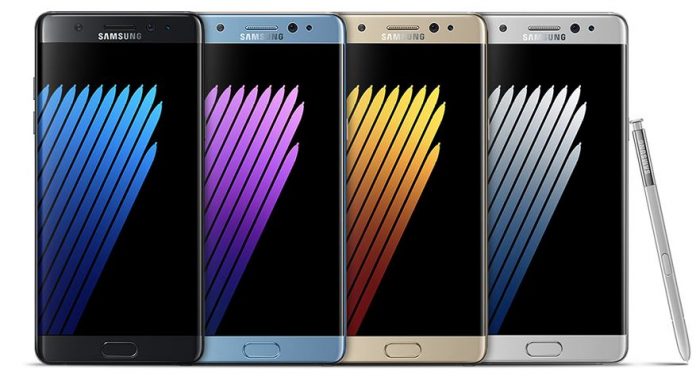 After a lot of speculation and numerous leaks, Samsung has finally unveiled the Galaxy Note 7. This is the sixth version in the Note series, though Samsung has skipped over the Note 6 name to place it on the same numbering system as its flagship Galaxy S series.

The Galaxy Note 7 brings its A game to the phablet wars, as the device sports a sleek and luxurious look, along with a water-resistant S Pen, and added security with the inclusion of an iris scanner. But how will it fare when compared against Apple’s supersized phone of the moment, the iPhone 6s Plus?

This article provides a comparison of the Samsung Galaxy Note 7 and the Apple iPhone 6s Plus.

Design
The Samsung Galaxy Note 7 has a metal and glass build, and the device measures 6.04 x 2.91 x 0.31 inches and weighs 5.96 ounces. It has an IP68 certification, which means that the smartphone is dust and water resistant. The Galaxy Note 7 is available in Blue Coral, Black Onyx, Silver Titanium, and Gold Platinum.

The Apple iPhone 6s Plus has an aluminum and glass build and measures 6.23 x 3.07 x 0.29 inches and weighs 6.77 ounces. The phone is not waterproof, but it has 3D Touch technology which allows the user to prompt different actions or apps depending on how much pressure is applied to the phone’s screen. It comes in four color options Gold, Silver, Space Grey, and Rose Gold.

Processor and Operating System
The iPhone 6s Plus is powered by the Apple A9 chip with 2 GB of random access memory (RAM) and runs on iOS 9, while the Galaxy Note 7 has a Samsung Exynos 8890 octa-core chip with 4 GB RAM and runs on the Android 6.0.1 platform.