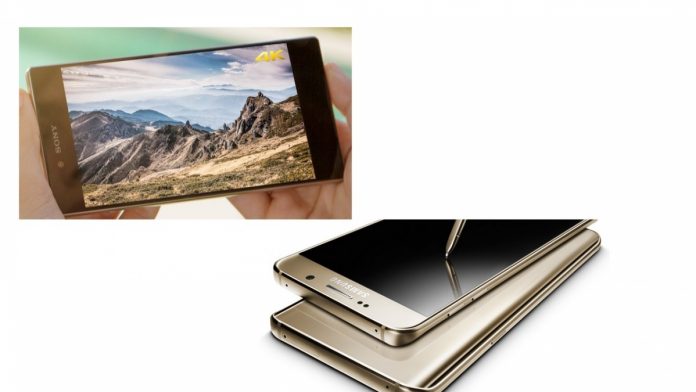 More and more choices of smartphones are coming to the market, especially that gadgets are normally released by companies at around August to October timing. One of the rising options of people are phablets, where they get to have a big screen for video viewing but still get the functionality of a phone. For now, we will take a look at the specifications of Japanese company’s flagship, Sony Xperia Z5 Premium, compared to the Korean company’s recently released Samsung Galaxy Note 5.

In terms of display, Note 5 gets a super AMOLED screen at 5.7-inch with 1440×2560 pixels at 518 pixels per inch. On the other hand, Sony impressed people with its 4K IPS LCD screen with 2160×3840 pixels with 806 pixels per inch at a smaller size of 5.5-inch. The 4K technology is indeed a dash ahead for the Japanese company and may give an edge for those who are very particular about the screen displays, although Note 5’s display is not bad at all.

Note 5 is powered by an octacore CPU with four cores at 1.5 GHz and the other four at 2.1 Ghz, along with a Mali-T760MP8 GPU and Exynos 7420 chipset. Xperia Z5 Premium also uses octacore CPU with four cores at 1.5 GHz and four cores at 2 Ghz, along with an Adreno 430 GPU and a Qualcomm Snapdragon 810 chipset. Meanwhile, Note 5 houses a 4GB RAM but the downside is that it does not have a memory card slot for external expansion, so users have to do with its built-in internal storage. On the other hand, Xperia Z5 Premium has a 3GB RAM and can expand its storage up to 200GB through external memory, to add to its internal storage. In terms of speed, Note 5 is faster with its chipset.

For its camera, Note 5 sports a 16 megapixel rear shooter with optical image stabilization, similar to S6’s, and a 5-megapixel front shooter. On the other hand, Xperia Z5 Premium boasts a 23 megapixel rear shooter with a LED flash and its latest Hybrid Focus technology and a 5.1 megapixel front shooter. As Sony is known for having better cameras on its phones even for other models, Xperia Z5 Premium gives better quality image here.

In terms of overall look, both devices come with metal frame but Note 5 is encased with a slightly curved Gorilla Glass 4. Its stylus pen is redesigned with a click to eject button and can take notes even if the screen is turned off. It comes in four color options at black, white, silver, and gold. Meanwhile, Xperia Z5 Premium’s metal frame is styled with a nylon protective covers and a glassy cover that gives a glossy finish. It comes with an IP68 certification indicating that it can be submerged in a 1.5 meters water for 30 minutes. The device comes in three color options of chrome, gold, and black.

Note 5 costs around $249.99 with a two-year contract, while Xperia Z5 Premium, with price still unconfirmed, is rumored to be at around $910 without contract.

Both devices have some winning feature over the other, but for people who prefer a sleek handset with faster processor at a cheaper price, Note 5 may be the way to go. Meanwhile, for those who are willing to pay higher but with better display and camera, Xperia Z5 Premium may be the choice.