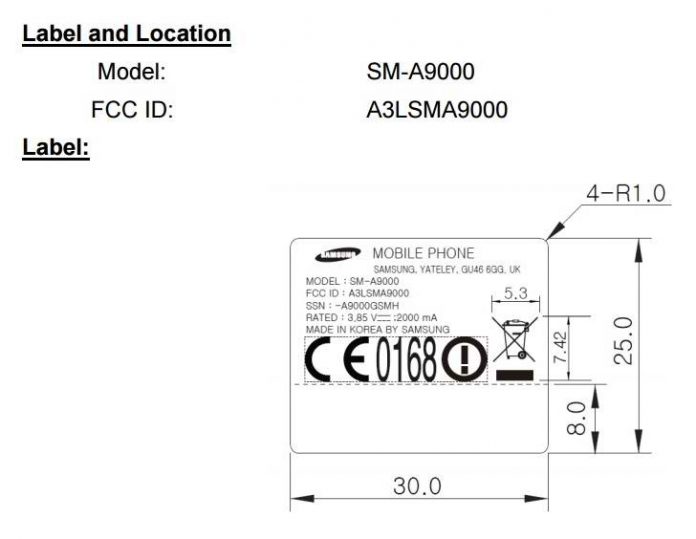 The new line of Samsung Galaxy A smartphones is set to get their new member in the team, as the US Federal Communications Commission or the FCC recently certified the device, hinting on a nearing release in the U.S. region.

The FCC certification for the Galaxy A9 showed that it passed the FCC standards. While the listing itself does not contain new information that has not yet been known, the sudden arrival of the certification further strengthens the expectations that the new Samsung Galaxy A9 is coming to users sooner rather than later.

Previously, the upcoming Samsung Galaxy A9 had been the topic of a major leak, as a report from China showed a leaked promotional item of the new Galaxy A9 lined up among the new versions of the Galaxy A5 and the Galaxy A7. The leaked images featured promotional ads detailing the specs and features of the device.

According to the leak, the Samsung Galaxy A9 will be sporting a 6-inch Super AMOLED display with a 1080p Full HD resolution. It will run under a Snapdragon 620 chipsetrecently announced by Qualcomm as the new Snapdragon 652with an octa-core Cortex A53 and A72 CPUs clocking in at 1.8 GHz speed and with an Adreno 510 GPU.

It packs 3GB RAM along with 32GB internal storage capacity, with support for microSD expansion of up to 128GB.

Just like the other Galaxy A series devices, the Galaxy A9 will be clad in a metal frame and with dual 2.5D glass panels. As for the camera, the Galaxy A9 is set to have a 13-megapixel main rear camera with Optical Image Stabilization feature and an f/1.9 aperture for low-light shooting. This will be coupled with an 8-megapixel front facing camera.

The device will also feature support for Samsung pay through the built-in fingerprint scanner. It will be powered by a 4,000 mAh battery and will boot on Android Lollipop 5.1.1.

Apple Watch Reserve Strap: 3 color options for device that can...