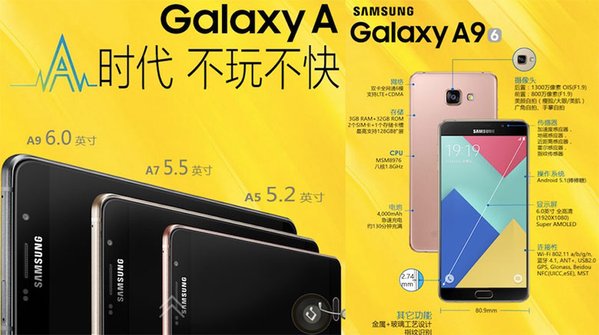 The new Samsung Galaxy A9 was officially launched in the Chinese market just last week. However, Samsung did not yet offer the device for purchase and no pricing details about the new addition to the latest line of Galaxy A series of smartphones had been shared. Now, as per latest reports, users may get a fairly good idea of what price to expect should they want to purchase the Galaxy A9 anytime soon.

According to a report by Fone Arena, a leaked screenshot from mobile site Weibo revealed that the new Samsung Galaxy A9 smartphone may very well be priced in China at RMB 3,199or as per current exchange rates, about $495.

While the mentioned price can be expected to be the device’s official market price in the Chinese market, it gives no assurance that a simple U.S. dollar equivalent to it would automatically be the price of the device outside China. Taxes, import/export and handling fees, and other additional expenses that might affect the price of the device outside its initial launching market should be considered as well.

To recall the specs, the new Samsung Galaxy A9 sports a 6-inch Super AMOLED display with 1080p Full HD resolution. It is made with 2.5D curved glass. Moreover, the device boasts of narrow 2.74 mm bezels on the display.

The Galaxy A9 runs under the newly renamed Snapdragon 652 chipset and comes with an octa-core CPUa quad-core 1.8GHz ARM Cortex A72 and a quad-core 1.2GHz A53. An Adreno 510 GPU handles the graphics. It packs 3GB RAM, with 32GB of built-in internal storage, expandable via an external microSD card expansion of up to 128GB.

The new Galaxy A9 also features support for Samsung Pay via the fingerprint scanner embedded on the home button of the device.

The camera is a 13-megapixel one with a S5K3L2 sensor, Optical Image Stabilization technology, and LED flash. The front sports an 8-megapixel camera with f/1.9 aperture.

The device is powered by a fast-charging 4,000 mAh battery and boots on Android Lollipop 5.1.1. It comes in white, gold, and pink.