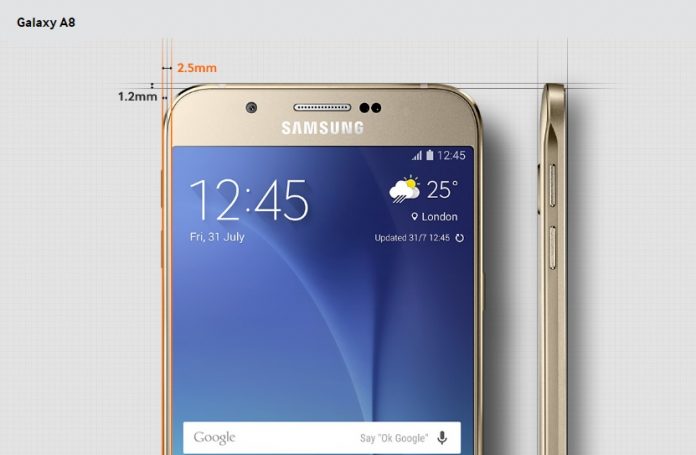 Aside from the Galaxy C and J series of smartphones, another iteration in the Galaxy alphabet may hit the stores before the year ends. Rumors have been spinning as of late that the latest Samsung Galaxy A8’s specs have been spotted on a benchmarking site, not to mention spy shots of its alleged render are also making rounds on the web just recently.

Eagle-eyed Samsung fans saw that Chinese benchmark tool AnTuTu had a rundown of the handset’s rumored specifications. If the benchmark snapshot is anything to go by, it is said that the smartphone will be carrying a screen display with a typical 1,080 x 1,920-pixel resolution. In addition, it also suggests that it will still carry the Android 6.0.1 Marshmallow operating system and is likely to be powered by Samsung’s Exynos 7420 processor. Additionally, it will be backed with a Mali-T760 graphics coprocessor.

Furthermore, the benchmarking site also noted that the Samsung Galaxy A8 will be lodged with 3 GB of random access memory (RAM) with 64 GB of storage space for the tested variant. The handset’s camera, on the other hand, is said to boasting an 8- and 5-megapixel rear and front-facing snapper, respectively, though it was not mentioned by AnTuTu as to what are the additional features of the phone’s camera component.

Aside from the said benchmark listing, leaked renders of the purported Galaxy A8 were also posted online and from the looks of it, the phone may well seem to have a curved edged display and a glossy back panel finish from which the spy shots featured the black variant of the phone.

Additional attributes that are rumored to be fused in the phone’s latest iteration might include a fixed lithium-ion battery pack with a 3,050 mAh capacity, a micro-USB version 2.0 though the Type- C port could have been a better forecast, and additional color variations of pearl white and champagne gold.

Meanwhile, fans will have to stay tuned for upcoming updates about the rumored smartphone and at the same time take the abovementioned specs with a dash of salt.