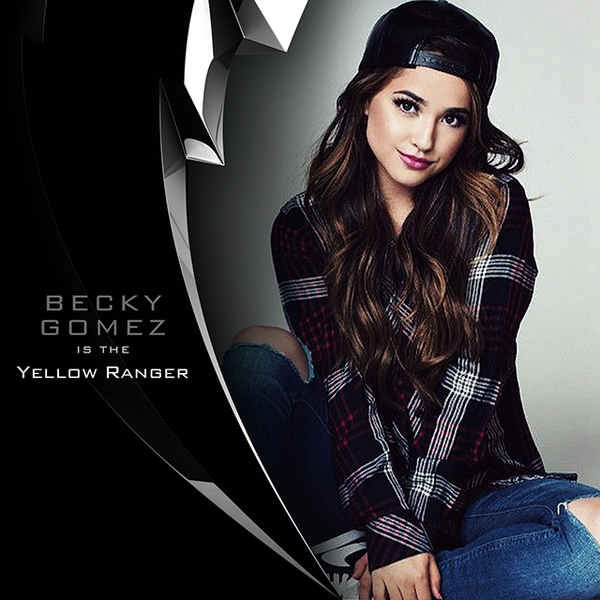 The Power Rangers is finally complete. In the same way the other new Rangers were revealed, the official “Power Rangers” Twitter account has introduced the fifth and final member to complete the core team for the upcoming 2017 reboot, “Saban’s Power Rangers.”

Actress and singer Becky G. was cast as the new Yellow Ranger. Like most of the actors cast as the new Rangers, the singer-actress can be considered a newcomer, with her credits going from various song performances for animated movies like “Hotel Transylvania” and “The Smurfs 2.” Her most recent appearance includes guesting on the TV series “Empire.”

For the new film, the character of Trini, the Yellow Ranger, is described as a “mysterious and extremely bright” 17-year old. Being a loner, Trini is “is self-sufficient, contemplative, but always observant. All she wants is to find her gang of friends, but she’ll never admit it least of all to herself.”

The actress herself expressed her excitement for the role on her Twitter posts, noting that her favorite color is yellow, “It’s like it was meant to be.”

The five new Rangers consist of the same names as those in the original “Mighty Morphin Power Rangers” series. The leader of the team, Jason, the Red Ranger, will be played by Dacre Montgomery.

Naomi Scott from “The Martian” is Kimberly, the Pink Ranger. She is “unconventionally cool all in a way the popular girls wish they were.” Having her personality changed after her absence of six months, Kimberly is actually masking a secret within her.

RJ Cyler was revealed as Billy, the Blue Ranger. Zack, the Black Ranger, will be played by Asian actor Ludi Lin.

“Saban’s Power Rangers” will be directed by Dean Israelite of “Project Almanac,” who has the vision for a fun yet grounded take on the original “Power Rangers” story. Burk Sharpless and Matt Sazama of “The Last Witch Hunter” have reportedly finished writing the first draft of the script of the film, while Ashley Miller and Zack Stentz are developing a mature take on it. Franchise creator Haim Saban will be producing the reboot film.