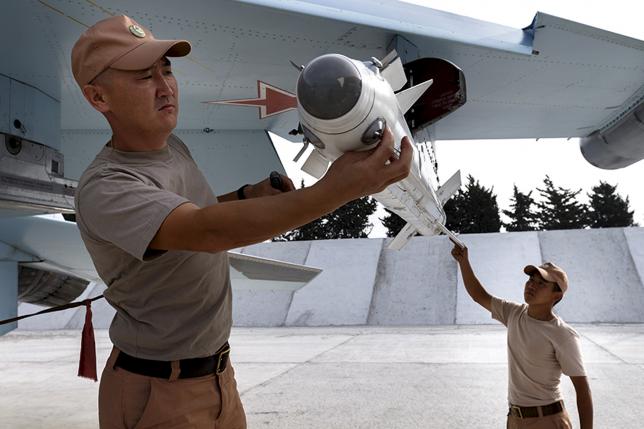 Moscow’s military force in Syria has grown to about 4,000 personnel, but this and more than a month of Russian air strikes have not led to pro-government forces making significant territorial gains, U.S. security officials and independent experts said.

Moscow, which has maintained a military presence in Syria for decades as an ally of the ruling Assad family, had an estimated 2,000 personnel in the country when it began air strikes on Sept. 30. The Russian force has since roughly doubled and the number of bases it is using has grown, U.S. security officials said.

The Russians have suffered combat casualties, including deaths, said three U.S. security officials familiar with U.S. intelligence reporting, adding that they did not know the exact numbers.

The United States has extensive intelligence assets in the region, along with satellite imagery and electronic eavesdropping coverage and contacts with moderate Sunni and Kurdish rebels on the ground in Syria.

Russia’s foreign ministry declined to comment on the size of the Russian contingent in Syria or any casualties it has suffered. It referred questions to the Russian Defense Ministry, which did not respond to written questions submitted by Reuters.

The only death the Russian government has reported was that of a serviceman who the military said died by suicide. The man’s parents have said they doubted this account.

The United States has strongly criticized President Vladimir Putin’s military intervention in Syria’s 4-1/2-year civil war, and President Barack Obama has predicted it could lead to a quagmire for Russia.

But Obama has had little success in affecting the conflict himself. Washington has targeted Islamic State in more than a year of air strikes, and last week Obama ordered the first U.S. troops into Syria – a small contingent of up to 50 special operations forces who will advise U.S.-backed rebels.

‘PEOPLE OUTSIDE The WIRE’

A U.S. defense official said Russian aircraft are now operating out of four bases, but multiple rocket launcher crews and long-range artillery batteries are deployed outside the facilities.

“They have a lot of people outside the wire,” he said.

Victoria Nuland, the top U.S. diplomat for Europe, told U.S. lawmakers Russia had begun to deploy ground assets such as artillery to areas Assad forces have lost to the moderate opposition, including near the cities of Hama and Homs.

“Russia is fielding its own artillery and other ground assets around Hama and Homs, greatly increasing Russia’s own soldiers’ vulnerability to counterattack,” Nuland, assistant secretary of state for European and Eurasian Affairs, said.

The main Russian base is at the Bassel al-Assad International Airport near the port city of Latakia. All of Moscow’s fixed-wing aircraft are flying from there in support of ground offensives by the Syrian army and foreign Shiite militias, the defense official said.

Three other bases – Hama, Sharyat and Tiyas – are being used for helicopter gunships, he said. The Russians began operating from Tiyas only this week, the official said.

Current government ground offensives appear aimed at securing President Bashar al-Assad’s grip on a rump state running from Aleppo in the north, through Hama and Homs, south to Damascus and the Lebanese border.

Despite the Russian air strikes, the offensives have failed to make significant advances, the U.S. officials and independent experts said. A key factor appears to be significant losses by pro-government forces of tanks and other armored vehicles to U.S.-made TOW anti-tank missiles that Saudi Arabia has been supplying to the anti-Assad rebels.

“The impact was insufficient to achieve a breakthrough against opposition forces except minimally south of Aleppo,” Yezid Sayigh, a senior associate at the Carnegie Middle East Center, a Beirut-based policy institute, told a Washington briefing on Tuesday.

Russia said when it began its air strikes that it is primarily targeting Islamic State, which controls large parts of northern Syria. Western governments and opposition activists say that Russia has mostly been hitting other anti-Assad forces, including some groups backed by the United States. The top U.S. diplomat in the Middle East reiterated this charge on Wednesday.

A Reuters analysis last month of Russian Defense Ministry data showed that almost 80 percent of Russia’s declared targets have been in areas not held by Islamic State.

A U.S. intelligence official said the Russian-backed offensives could still achieve breakthroughs, but the longer the stalemate persists, the more pressure will build on Putin to consider new options.

“The major offensives are only in their infancy,” said the official, who requested anonymity in order to discuss the issue.

Christopher Harmer, a senior analyst with the Institute for the Study of War, a research institute, said the increase in Russian forces on the ground represents support and logistical personnel needed to sustain combat operations.

“What has most likely happened is that as soon as the Russians had enough forces in theater to start military operations, they did,” Harmer said. “The increase to 4,000 is simply the logistical tail to support the combat tooth.” He predicted the Russian force could expand to 8,000 or more.

Russia and Turkey refuse to back down in row over jet...