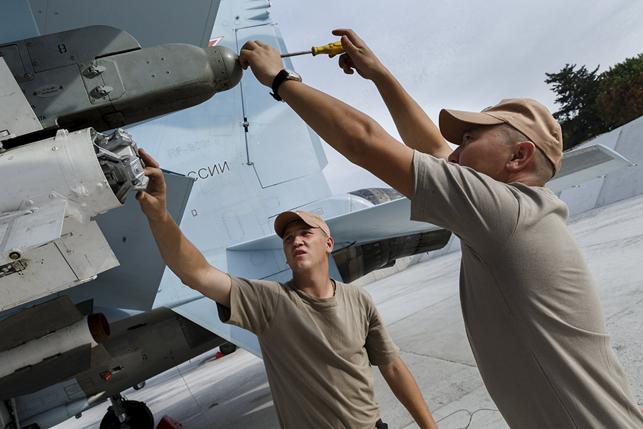 Russian Foreign Minister Sergei Lavrov said the Kremlin wanted Syria to prepare for parliamentary and presidential elections, as Moscow intensified its drive to convert its increased clout with Damascus into a political settlement.

In comments which mark a shift in Russia’s position, he also said that Russia’s airforce, which has been bombing Islamist militants in Syria since Sept. 30, would be ready to help Western-backed Free Syrian Army rebels, if it knew where they were.

The Kremlin, Syrian President Bashar al-Assad’s strongest foreign ally, has spoken broadly about the need for elections in Syria before. But Lavrov’s comments were its most specific call for political renewal yet and came just days after a surprise visit by Assad to Moscow.

“External players can not decide anything for the Syrians. We must force them to come up with a plan for their country where the interests of every religious, ethnic and political group will be well protected,” Lavrov told Russian state TV in an interview broadcast on Saturday.

“They need to prepare for both parliamentary and presidential elections.”

Lavrov on Saturday phoned U.S. Secretary of State John Kerry to discuss organizing talks between the Syrian government and opposition, the Russian foreign ministry said. It said the two men had spoken of the need to tap the potential of other countries in the region to push the political process forward.

The U.S. state department declined to comment, pointing to what Kerry had said about Syria in Vienna on Friday when he struck an upbeat note about the possibility of cooperating with Russia to find a political solution even as he acknowledged that the basic disagreement on Assad’s future remained.

Moscow says Assad must be part of any transition and that the Syrian people will decide who rules them. Washington has said it could tolerate Assad during a short transition period, but that he would then have to exit the political stage.

Lavrov, who also discussed Syria on Saturday with his Iranian and Egyptian counterparts, said the Kremlin had told Assad during his Moscow visit that political progress was needed. Lavrov said the success of Assad’s army on the battlefield, with Russian air support, would consolidate his government, making it more interested in a political deal.

Lavrov’s interview was broadcast a day after a meeting in Vienna between Russia, the United States, Turkey and Saudi Arabia where a political solution to Syria’s civil war – now in its fifth year – was discussed.

Ahmed al-Seoud, head of another FSA-affiliated group, the 13th Division, was equally bemused.

“Russia hit the factions of the Free Army and now it wants to cooperate with us, while sticking by Assad? We do not understand anything from Russia,” he said.

The Free Syrian Army is a loose alliance of groups, most of them with a Syrian nationalist outlook, that are often led by Syrian army defectors but have no central command structure.

Bashar al-Zoubi, head of the political office of the FSA-affiliated Yarmouk Army, said Russia’s call for elections was pointless because of the huge number of Syrians who had fled, while others were in jail or being hunted by the government.

“If Russia is serious about a solution it must force out Assad and his gang, and work to secure a peaceful political transition of power,” he said

Russia’s planes have flown 934 sorties and destroyed 819 militant targets in Syria since the start of its operation on Sept. 30, the defense ministry said on Saturday.

Lavrov, whose interview was recorded on Thursday but only released on Saturday, called Washington’s refusal to coordinate its Syria campaign with Moscow “a big mistake.”