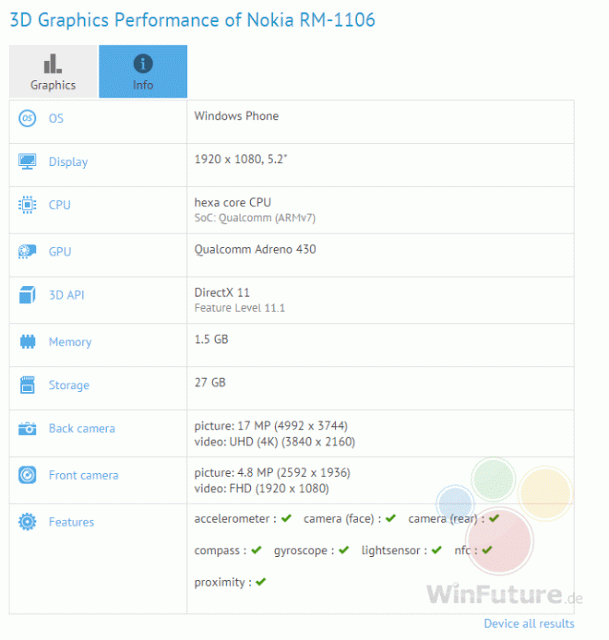 The new Microsoft smartphone that is set to succeed the now discontinued Lumia 830 may be called the Microsoft Lumia RM-1106, according to a report that surfaced, together with its alleged handset specification.

Talks of a new Lumia phone began when Microsoft discontinued the Lumia 830. Originally rumored to be called the Lumia 840, the phone is set to improve where the Lumia 830 came short—in processor capability, for one.

German website WinFuture.de reported what is said to be leaked specifications of an upcoming Lumia 840 smartphone. According to the report, the handset, called the Nokia RM-1106 is part of the new flagship phones in the works by Microsoft. The handset model name noticeably still had the name of its original Finnish manufacturer.

The phone is said to be 5.2 inches big with Full HD resolution, running on Windows OS (probably on 8.1, but also possible as an out-of-the-box Windows 10 phone) under a 64-bit Hexa Core Qualcomm Snapdragon 808 CPU, and a Qualcomm Adreno 430 GPU chipset. The phone has a 17 meagpixels rear-camera, with 4K resolution recording capability, and a 5 megapixels front-facing camera with Full HD recording capability. The phone has a 32GB built-in internal storage, with an odd value of 1.5GB RAM.

The phone may very well be the rumored Lumia 840, as the specifications tells that the phone is between a high-end (as suggested by its processor) and a mid-range (suggested by its low memory capacity) model. However, there are noticeable inconsistencies in the reported leak. In an analysis by OneTechStop, a Snapdragon 808 processor should come with and Adreno 418 GPU chipset, not a 430 one. Also, the low 1.5GB RAM make it unlikely for the phone to be able to record/play a video with 4K resolution. The analysis also said that while this may be the Lumia 840, this may also just be a prototype phone meant for hardware testing.

In a previous report by NDTV, the Lumia 840 was allegedly posted in the import-export site Zauba, where there are two available modelsa single-SIM and a dual-SIM version. The report said that the alleged Lumia 840, presented there as the Nokia RM-1085, is delivered for testing in India.

Microsoft is yet to make any official announcement regarding their upcoming flagship phones.