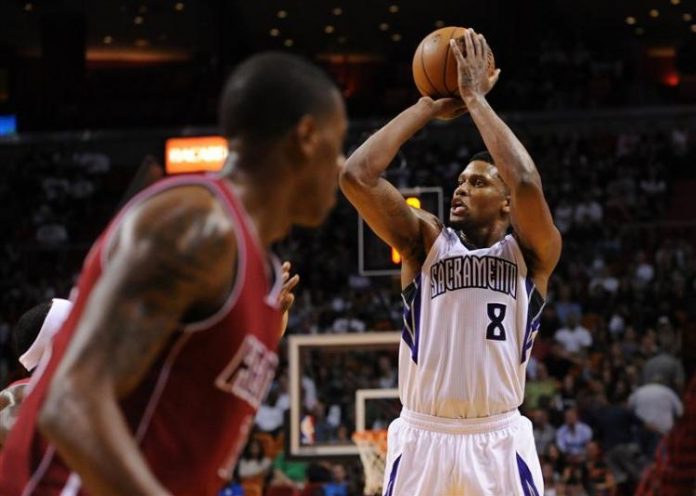 Rudy Gay of the Sacramento Kings has been involved in one trade rumor after another since the off-season began, but which jersey the veteran small forward will be wearing next season is still currently up in the air.

According to Sportsrageous, the Brooklyn Nets has been taking advantage of the off-season to rebuild its roster, trading off Thaddeus Young to the Indiana Pacers during the NBA draft night for Caris Levert, the 20th pick overall and second-round pick to follow. The recent free agency also saw the Nets sign on Jeremy Lin, who is expected to take on starting point guard duties in the upcoming season.

These trade-offs and acquisitions have led to rumors about the Nets possibly recruiting one other veteran baller to add to their lineup, and talks are rife that they’re eyeing the Sacramento Kings’ 30-year-old Gay.

Gay may be coming on in years and may not exactly be superstar material, but he’s shown steady skills in court, bringing in solid numbers each season. The previously concluded season saw him averaging 6.5 rebounds, 1.7 assists and 1.4 steals to complement his 17.2 points per game.

FanSided’s Tyler Dencker believed that trading for Gay would be a good decision for the Brooklyn Nets, especially if they traded Bojan Bogdanovi?, a young small forward, to fill in Gay’s position should he decide to leave the Sacramento Kings.

Rumor has it that the Kings are looking to add a point guard to their lineup, which means that the Nets could either trade off Shane Larkin or Donald Sloan or get another team to join the trade with a potential point guard to fill in the Kings’ roster. Ricky Rubio of the Minnesota Timberwolves seems to be a prime candidate.

If this trade-off does happen, the Nets will be able sign on Gay, Timberwolves will get Bogdanovi?, and the Kings will have a new point guard in Rubio.

These are all just rumors, and Gay could go for an entirely different deal before the off-season ends.