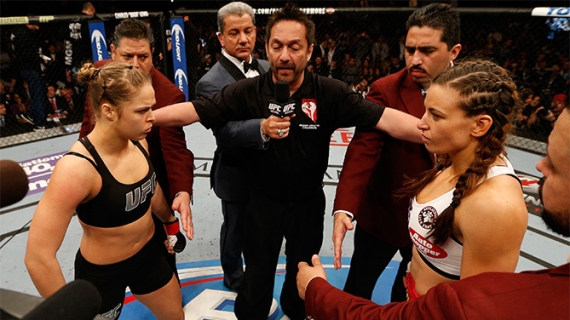 Last Sunday’s UFC 196 proved to not only live to expectations but also surprised a lot of fans watching the match. Both fights were tremendous but ended in what would be a shock to many. One of which is Meisha Tate choking Holly Holm to submission via a rear naked choke.

Fresh from her impressive win against Holm, which ultimately makes her the defending UFC Bantamweight champion, Tate is looking forward to meet her next opponent and if everything goes to plan, it will be Ronda Rousey.

“I think that Ronda now will fight Miesha Tate for the title. That’s what’s going to happen,” UFC President Dana White recently said. “That’s what I said before this fight even happened. Whoever wins tonight will fight Ronda for the title.”

Ironically, the belt which now is in the possession of Tate was also held by Rousey last year before she was knocked out by Holm in UFC 193. And what makes the Rousey-Tate fight more interesting is the fact that Rousey was the one who handed Tate her last defeat in UFC 168 where the former had the latter submit to her via an arm bar.

“I am interested in it for sure. Obviously I was supposed to fight her when Holly fought her and beat her, so I was prepared and ready for that. I’ve been ready for that for a long time,” Tate revealed but also added that while she is raring to go, she understands that the fight will not happen until Rousey’s comeback in November.

The American wrestler also threw some shade on the former undefeated fighter’s way questioning her motivation to recover from her loss last year.

“She’s like, I lost this belt and my motivation was to have Travis Brown’s baby. That doesn’t sound like a very motivated comeback,” she pondered.

But it seems like Rousey is taking a more relaxed approach on her upcoming third date with Tate just saying, “Looks like I’ve got to get back to work,” after the game shocker.