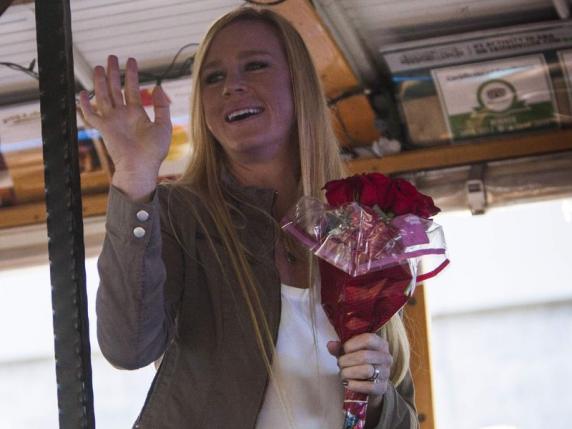 It seems like the much awaited rematch between mixed martial arts fighters Ronda Rousey and Holly Holm may not happen in July during UFC 200.

Holm told New York Post previously that she was fine having the rematch in early July if she would emerge victorious in her title defense against Miesha Tate during UFC 197 in March.

“I’m just ready for what opportunities come. I was OK with July as long as it was going to be a guarantee. I didn’t want them to say July and then it turned into October and the next thing you know it’s going to be a year since I’ve fought,” she said.

However, Rousey’s striking coach Edmond Tarverdyan believed that the tentative schedule may be too soon. “I don’t see it in July at this point. Ronda did three fights last year. I think she deserves time off. That’s what [UFC president] Dana [White] said, too,” he revealed.

He added that Rousey may need four months to prepare as she is currently busy with her filming commitments for the remake of 1980s “Road House” and production will finish in the spring. “She’s trained very hard to give it 100 percent every day, so you know, that’s hard for the body. Ronda has been through a lot. So we need to relax a little bit, take our time and get her in better shape slowly and mentally and physically,” Tarvedyan added.

Tarverdyan also responded to critics saying that Rousey should consider overhauling her coaching staff after Holm was able to beat her during UFC 193 via knockout, 59 seconds in round two of their bout. It marked Rousey’s first loss in the career.

After the devastating defeat White set up the rematch for UFC 200 in which former WWE superstar CM Punk may also have his debut.

'Daredevil' season 3 release date, plot spoilers: Bullseye as the next...