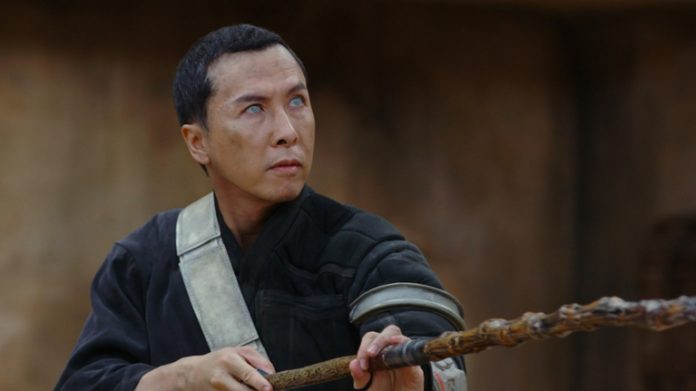 A batch of new photos from “Rogue One: A Star Wars Story” has made its way online. Part of Empire magazine’s October issue, the extensive collection of snaps provide a good look at the band of rebel misfits that will be the focus of the aforementioned movie.

Thankfully, dedicated website Making Star Wars redistributed the shots which preview what the anthology film will be bringing to the “Star Wars” lore. While the photos are somewhat only a new look at the film’s main game players, it does not divulge too much in terms of “Rogue One’s” plot specifics. However, a specific one which involves Felicity Jones’s Jyn Erso and Donnie Yen’s Chirrut Imwe somehow appears to be more striking compared to others. The photo shows Chirrut in what is presumed to be Jedha’s side streets hunched like a beggar. Jyn, on the other hand, is crouched opposite of him looking like she’s ready to strike a conversation. What is interesting is piercing the still from the snippets of the spiritual warrior, it appears to be the same extended take where he wields his staff against Stormtroopers when Jyn and Diego Luna’s Cassian Andor get arrested. By the end of the trailer, Chirrut ends up on Jyn’s squad together with his best bud, Jiang Wen’s Baze Malbus.

Outside of its context, the Force believer is already a fascinating character on his own. Despite not being a Jedi, he disciplines himself via their ways which in turn helps him function despite being blind. If nothing, he is reminiscent of “Star Wars Rebels'” Kanan who has just been recently blinded and has been learning to rely on the Force to adapt.

Aside from character-centric photos, other notable photos preview the kind of setting that “Rogue One” will be showing. There had been clamor when what appeared to be a tropical setting was teased by the epic AT-ACT shot from the movie’s second trailer. And now Jyn and Cassian’s bundled up look, not quite freezing-looking like Hoth would be, in one of the snaps hints at an entirely different setting.

Another member of the Rogue team, Riz Ahmed, recently talked about the much-anticipated flick when he made an appearance on Stephen Colbert’s “The Late Show.”

“It’s different to the other ‘Star Wars’ movies,” he said of the filming style. “It feels very immersive and is a boots-on-the-ground feel. We’d do these intense scenes and we’d do it again and again without stopping.”

The British-Pakistani plays Bodhi Rook in the flick. Much like Alan Tudyk’s motion-captured role as droid K-2SO, the pilot was once working for the Empire until he eventually joined the Rebel Alliance.

“Rogue One: A Star Wars Story,” follows a small group of rebels trying to get a hold of the plans for the first Death Star. The stand-alone film directed by Gareth Edwards blasts through cinemas on Dec. 16.