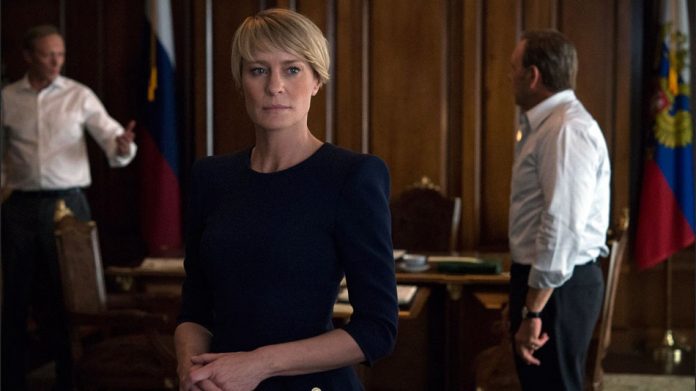 With “House of Cards” breaking into season 5 presumably next year, major rumors from fans are pointing towards the Underwoods being at odds with each other. This is especially possible given that a major power play may eventually come down with Frank (Kevin Spacey) still on his hospital bed and the ever-scheming First Lady Claire (Robin Wright) just lurking around the corner.

The duo’s relationship is no longer exactly built on the merits of a traditional married couple. Instead, they have bonded over the fact that they have to stick together in order to retain power that is currently in their hands. But with her husband incapable of running the country, this may be the perfect time for Claire to turn the table around and assume the political power which has been teased to her for so long.

While a lot of people back on Claire to be the one that will ultimately dethrone Frank from his high chair, Wright recently shares that her character will slowly have some internal shakeups moving forward in the story.

I didn’t base [Claire Underwood] on a female politician. I didn’t base her on a human being… David Fincher said, “Imagine she’s a marble bust, that you would see in a museum and that she’s an iconic figure and there’s a stoicism, and you can crack that marble. That’s what we’re gonna do over the course of the show. We’re going to slowly make cracks in her marble,” the 50-year-old teased of her character during an interview with Awards Daily.

The current First Lady in the show is not necessarily unaware of her husband’s shenanigans and her hands are obviously not clean too. Just like how it was teased that Frank will be haunted with her past demeanors, this might be a hint that the show will mine some of Claire’s old demons and bring them back into the fold. This poses a good point of destruction for Claire if she successfully takes over the Presidency from Frank.

No official release date is set yet for “House of Cards” season 5 but fans can expect it to be available on Netflix sometime in March 2017.

'This Is Us' season 2 plot news, spoilers: Show's creator talks...