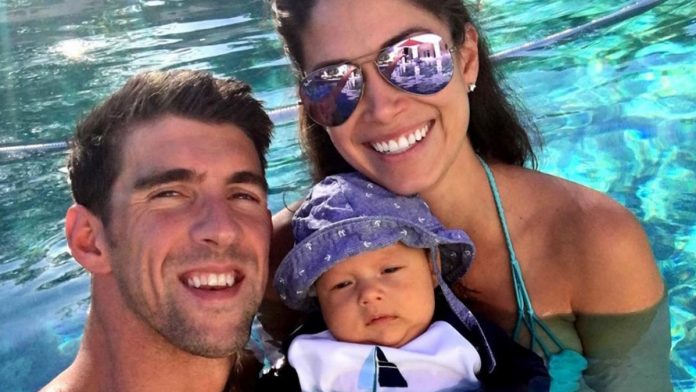 The 2016 Rio de Janeiro Games is currently in full swing. Aside from the medal tallies and scene stealers, the event also becomes one of the few times that the world zooms in on notable athletes competing for their respective countries. One of which is swimming icon Michael Phelps.

In light of Phelps’s unbelievable stint at the ongoing Olympics, the 31-year-old’s personal life has also been put in the spotlight especially with his upcoming wedding to fiance Nicole Johnson. Aside from her good looks, as proven by being 2010’s Miss California USA, the brunette is also giving all her support to her fianc, who was the American flag bearer at the opening ceremony. But while he continues to rake in the medals, Johnson on the other hand never misses a beat bringing along their 3-month-old son, Boomer Robert, to support Phelps

Last Tuesday, just after “The Baltimore Bullet” bagged the gold in the 4×200-meter freestyle relay, Johnson took to her Instagram account to congratulate her soon-to-be husband. “I’m at an absolute loss for words. Couldn’t be more proud of @m_phelps00. He is the epitome of working hard, dreaming big and achieving the all American Dream,” she wrote, posting a heartwarming photo of Phelps greeting his fiance and son.

The couple has been dating and on and off since late 2000s. However, there are contradictory reports as to when the couple actually started their relationship. Some say that it was around 2007 while others believe it was sometime in 2009.

Johnson is obviously not shy about expressing her love for the most decorated Olympian of all time, just as Phelps is with her. In an interview with USA Today last year, he shared how he got down on one knee and finally asked her to marry him.

“I never wanted to have a, ‘What if?’ I just told her exactly how I felt,” he recalled.

“I was like, as long as I can tell her that, I can go through my life and be happy. Whatever happens, happens. Obviously we worked through some things. There’s nobody in the world I would rather be with.”

No official wedding date has been set, presumably because of Phelps’ preparation for his campaign in this year’s Olympics. But it appears that both are extremely happy and a wedding ceremony can be expected soon after the games are over.