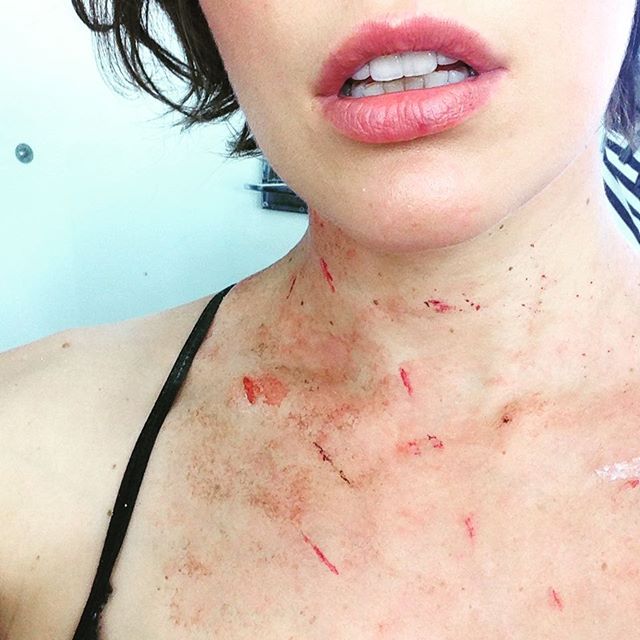 Resident Evil: The Last Chapter is currently under production with some photos of the star from the set circling the internet and giving fans a preview of what may come. Although it does not say much about the actual storyline, we can anticipate that there will be hard-kicking action from the upcoming film.

Resident Evil: The Final Chapter picks up from its previous film, Resident Evil: Retribution where Alice (Milla Jojovich) found herself alone after she is injected by the T-virus to regain her super power form and left off by Albert Wesker (Shawn Roberts) in Washington DC to bear the responsibility of saving humanity. With this, she has no choice but to go back where everything started in order to avoid human extinction at the Umbrella Corporation in Raccoon City. Meanwhile, the antagonists are also preparing to bring down and plague the remaining people. This could be the most difficult bout as she races against time to save the civilization.

Other casts who are confirmed to join her are Wentworth Miller as Chris Redfield, Bingbing Li as Ada Wong, Sienna Guillory as Jill Valentine, and Johann Urb as Leon S. Kennedy. The set is filmed in South Africa.

The Resident Evil series received relatively low critic rating on Rotten Tomatoes, with only its most recent film, Retribution, receiving the highest at 31%. The general consensus is that the film lacks creativity in its plotline. While viewers have mixed opinions regarding the film, Resident Evil still has fans highly anticipating each sequel and especially The Final Chapter.

Meanwhile, there was earlier news regarding Jojovich’s stuntwoman, Olivia Jackson, and an on-set accident where she was seriously injured after running into a metal arm while riding a motorcycle. She is in medically-induced in a coma in order to recover.

Resident Evil: The Final Chapter will return the big screen on January 27, 2017.

Frozen 2 news: Original team back to do sequel; romance for...