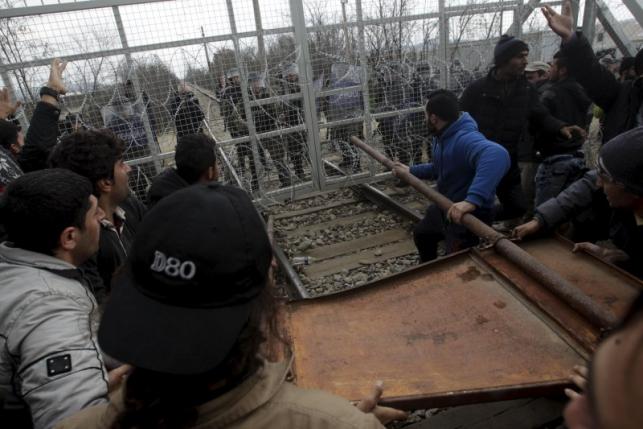 Some of the approximately 7,000 refugees staying in Idomeni in Greece are already starting to destroy the barbed wire fence that protects the borders of Macedonia. These refugees, comprised mostly of Syrians and Iraqis, are already desperate to reach northern Europe where they are welcome to stay.

Macedonian police try to push back the refugees by using tear gas and stun grenade.

At least 22 migrants, including children, are being treated by volunteer doctors for breathing difficulties and cuts.

With smugglers keeping a constant flow of refugees in the region and the migrant route to Germany being blocked by other Balkan countries, refugees are now stranded in Greece.

“We estimate that we will have a number of people trapped in our country which will be between 50,000 and 70,000. … I believe in the coming month,” Yannis Mouzalas, the immigration minister, told Greek Mega TV on Sunday as reported by the Reuters.

The North Atlantic Treaty Organization (NATO) is already implementing a plan to crackdown the people-smuggling business.

“If the NATO plan is implemented … it could reduce the inflow by about 70 percent,” Mouzalas said in the TV interview.

Macedonia’s move to close its borders came after Austria impose a daily limit of 80 asylum claims on its southern border. Serbia, Slovenia, and Croatia are also quick to replicate the move that refugees are being pushed back to Greece.

“Tragically, there seems to be more willingness among European countries to coordinate blocking borders than to provide refugees and asylum-seekers with protection and basic services,” said Giorgos Kosmopoulos, head of Amnesty International in Greece.

Greece is shouldering much of housing the refugees that arrive in the EU from Turkey. The country is slowly becoming a “permanent warehouse for human beings” since they are left with no choice because other countries in the migration route are already closing their borders.

In 2015, Greece received an influx of half a million refugees.