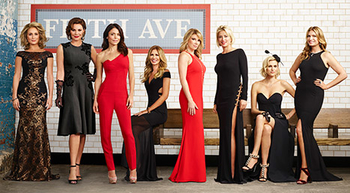 Although the girls have shared drinks and hugs during a Real Housewives of New York reunion show hosted by Andy Cohen, RHONY star Bethenny Frankel has spoken some strong words about co-star Ramona Singer.

Frankel published an entry in her Bravo blog to discuss what she actually feels about her co-star. In the entry, Frankel described her as “nuts.”

“She is nuts enough for all of us,” the star wrote in the entry.

Frankel said that she loves and has forgiven Singer for her slights against her, but she also said that Singer should be held accountable for her actions during the past season.

However, Frankel said that Singer had expressed remorse.

“Even though I love and forgive her, she had to be held accountable for her actions. From taking my property to lying about me cheating, she had to be checked. Based on a very kind voicemail she left me yesterday, she definitely feels remorse,” the star claimed in her blog post.

Frankel had given Singer some angry words during the reunion with Andy Cohen, US Weekly said.

She called Singer “cunning,” and accused her of spreading gossip to the girls in the group that Frankel was cheating on her husband.

“You have a nasty side,” Frankel told Singer during the show.

Singer also made the spotlight during the reunion show when she fell asleep while the other girls were being interviewed, the Mail Online said.

While Singer told Cohen that she felt sleepy as she didn’t have her afternoon nap, Luann de Lesseps told Cohen with hand gestures that Singer had more wine than she could handle.

“She had three glasses,” Luann could be seen mouthing to the other housewives.

Singer had attracted attention even before the RHONY reunion when she defended Josh and Kristen Taekman in the wake of the Ashley Madison scandal, in which accounts of the dating site’s prominent users were revealed.

The RHONY star told Entertainment Tonight that she believed Josh was just being silly when he signed up for Ashley Madison, and was not cheating on Kristen