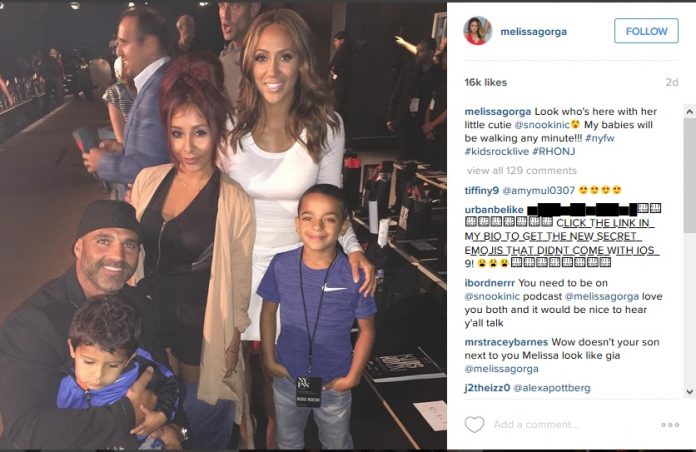 Rumors have it that the production for the “Real Housewives of the New Jersey” is currently underway, with the cast slowly shaping up for season seven.

A source close to the show exclusive revealed to ET Online that veteran cast members Teresa Guidice and Melissa Gorga will be onboard for the new season. Guidice is currently serving her prison term after pleading guilty to bank, mail, wire and bankruptcy fraud.  She is serving out her time at Federal Correctional Institution in Danbury, Connecticut. Although she was given a 15-month prison sentence, she is being released early in December.

Gorga seemingly confirmed the news when she posted an image of her son presumably at their house with cameras around and captioned it with, “Gino is totally cramping my style today…. #setlife #rhonj #cutie #hedoesitbetter.”

In addition, the source also mentioned that Jacqueline Laquita may likely return while Kathy Wakile and Rosie Pierri will become friends of the main cast.

On the other hand, fulltime member Dina Manzo who went back last season, has confirmed that she will not reprise her role in the show. Moreover, Amber Marchese, Teresa Aprea and Nicole Napolitano who also made their debut in season six have not been officially confirmed yet.

Some reports claim that Traci Barber, wife of former NFL star Tiki Barber, has also been asked if she is willing to join. However, there is no statement from Bravo regarding the speculations.

At one point during the preparation, the network reportedly approached “Jersey Shore” alum Nicole “Snooki” Polizzi and Erica Levy but the latter declined.

Although there is no announcement regarding Polizzi’s participation, Gorga posted another photo on her Instagram showing the reality star and the words that read, “Look who’s here with her little cutie @snookinic My babies will be walking any minute!!! #nyfw #kidsrocklive #RHONJ.”

Casting is expected to be finalized by the end of this month with the production said to be formally commencing when Guidice comes back from prison.