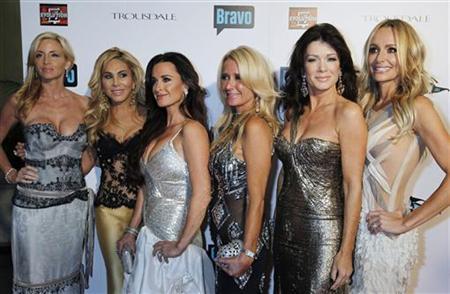 Frankel explained that she has known Richards for years and since the latter is “coming into town so I got together with her in the Hamptons,” reports an exclusive from E! Online.

Frankel shared her experience with the “RHOBV” housewives, saying, “I really enjoyed shooting with the Beverly Hills cast. I feel like I was really part of their cast for a small minute. I had some preconceived notions and I really liked talking to them and I thought it was amusing.

“I met someone new that I hadn’t met before and I had a great time. I really did, and I thought it was funny and I think there was a little drama and of course I was right in the middle of it, but I’m never afraid to say what I think about something. I might have put my foot in my mouth but you know it was funny, it was good.”

The episode will be aired once “The Real Housewives of Beverly Hills” premieres its new season.

During the crossover show, there was a report that Kim and Kyle Richards, both cast members of  “The Real Housewives of Beverly Hills,” were going through a difficult time. Both friends of Frankel, it seems that she did not restrain anything during the conversation. TV Guide said that the reality TV star spoke out directly and “wasn’t afraid to speak her mind.”

Meanwhile, for other news on “RHOBH,” Brandi Glanville, who has been a main cast from seasons 3 to 5, will come back in the show once in a while.

US Magazine reported from a source, “She’ll pop up here and there. But by no means will she be on full time.”

Along with her, Kathryn Edwards and Erika Jayne will also join the new season.

'Umbrella Corps' release date nears; what features to expect from the...