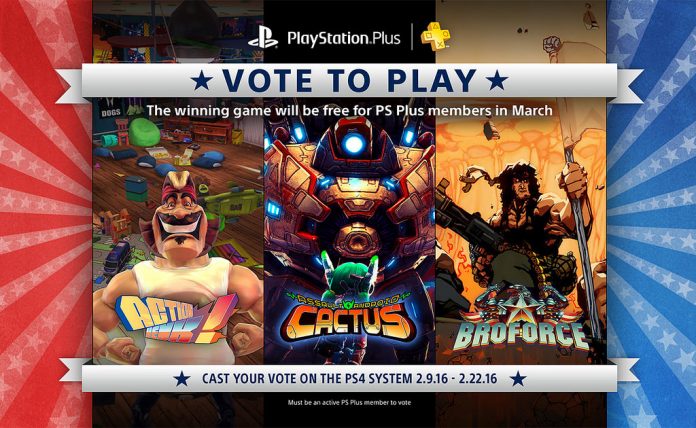 Due to popular user demand, Sony Computer Entertainment will be bringing back the Vote to Play voting system, a user poll that will let PlayStation Plus members select from a pre-determined roster the game that they want to be included in the next month’s list of free PS Plus member games.

As announced via the official PlayStation Blog, Sony will bring back the Vote to Play system. Players can choose the game they want to be included in the March 2016 roster of free PlayStation Plus games from a list of three choices. There will be a total of three choices of gamesRageSquid’s “Action Henk!,” Witch Beam’s “Assault Android Cactus,” and “Broforce,” a game with a classic 80’s feel from developer Free Lives.

“The thread that brings these three games together: fun titles that can connect the Plus community to play together with friends,” said PlayStation Plus Content Partnership Manager Greg Lewickyj. “For me, personally, one of the sweet spots in game design is a title that provides casual fun for almost anyone who picks up the controller, while providing a depth of mastery for those who want to push the game’s mechanics to their limits. We hope that you’ll enjoy learning about each game and the developers behind them before casting your vote.”

PlayStation Plus members can cast their vote on what games they want to be included for the March 2016 roster starting on Feb. 9, via the Vote to Play menu on the dedicated PlayStation Plus section on the user’s PlayStation Network account.