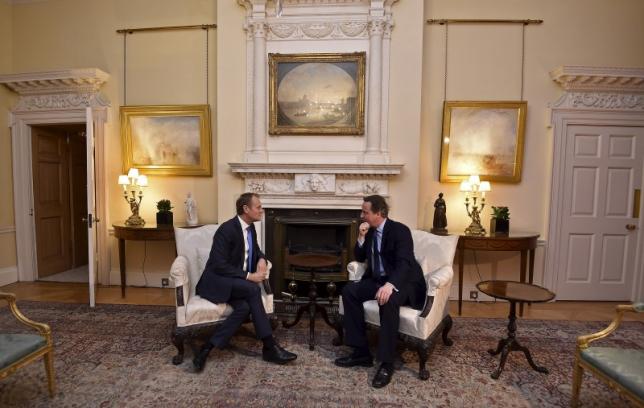 European Council President Donald Tusk presented on Tuesday proposals for keeping Britain in the European Union to a mixed response, underlining the challenges Prime Minister David Cameron faces to win over his people and other EU leaders.

The proposals, which addressed all four areas where Cameron has demanded reform, did little to ease doubts among his more Eurosceptic lawmakers and even some of the prime minister’s closest allies wondered out loud if the package — which must still be agreed by other EU states — would be enough.

The two sides have been locked in talks trying to find a way for Cameron to win what he calls the “best deal possible” for Britain while keeping other EU states onboard before a referendum which could take place as early as in June.

Tusk’s text said Britain could immediately suspend welfare payments to EU migrants for four years if Britons voted to stay in the bloc and could, alongside other countries, have new powers to block legislation. Britain could also opt out of further political integration in the 28-member bloc.

But with Eurosceptics describing the talks as “trivial” and some of Cameron’s allies saying the proposals would probably need more work, a summit of EU leaders on Feb. 18-19 was gearing up to be a difficult meeting.

Cameron said in a Tweet: “Draft EU renegotiation document shows real progress in all four areas where UK needs change but there’s more work to do.”

A British government source also issued a note of caution that although many boxes were ticked, any deal needed all 28 EU leaders to sign up.

“For many others (the other 27 member states) we are at the start of the negotiations rather than at the end of it,” the source said. “Nothing is agreed until all 28 member states are on board.”

Nonetheless, sterling jumped by almost half a U.S. cent after the outline of the proposed deal was released. The pound rose to $1.4425, up from $1.4380 beforehand.

Officials are keen to show Cameron has won agreement with Tusk on two important areas of the renegotiation – on stopping EU legislation it opposes and on curbing migrants’ benefits.

In the text, Tusk’s proposal would have a legally binding provision allowing a group of 55 percent or more member states to either stop EU legislation or demand changes to address concerns Britain has handed too much power to Brussels.

It also included a clause saying Britain could suspend some payments to migrants from the bloc for four years, starting immediately after the referendum, after meeting the conditions to trigger a so-called ’emergency brake’.

Both should go some way to appeasing critics of EU membership in Cameron’s party, although even an ally, London Mayor Boris Johnson, said he doubted the deal would be enough.

“I do think that the prime minister has been negotiating very hard and obviously very successfully but my view would be ‘not enough’ and we need to go further,” he told Sky News.

As well as curbing migration and returning powers to Britain, Cameron also wants his country excluded from the EU goal of “ever closer union” and says it should be protected against moves by the 19 countries that share the euro currency to impose rules by majority vote on London.

There is much still to decide, including how long the so-called “emergency brake”, or suspension, on welfare payments to migrants will be in force and how to enforce protection for London’s financial industry.

Talks will continue up to the February summit, but some Eurosceptics say the difficulties in getting a deal are being played up to make an eventual agreement seem like a triumph.

The stakes are high. The referendum will not only determine Britain’s future role in world trade and affairs, but also shape the European Union, which has struggled to maintain unity over migration and financial crises, by ripping away its second-largest economy and one of its two main military powers.

“These reforms would be good for Britain. With the changes set out today, Britain would be even stronger in Europe,” Stuart Rose, chair of Stronger In, said in a statement.

But Eurosceptics were not convinced.

“What the government is asking for from the EU is trivial. These proposals will not take back control from the EU,” said Matthew Elliott, chief executive of Vote Leave, one campaign lobbying for Britain to exit the European Union.

“These gimmicks have been ignored by the EU before and will be ignored again as they will not be in the EU treaty.”

Britain’s influential press, like the population, are split over the EU debate.

While the Daily Mail, Britain’s second best-selling newspaper, asked on its front page: “Is that it then, Mr Cameron?”, the right-wing broadsheet, the Telegraph, has been more supportive of Cameron’s renegotiation.

But perhaps more telling were the words of Britain’s most powerful media owner, Rupert Murdoch, on Twitter: “UK-EU negotiations meaningless without complete control of borders.”