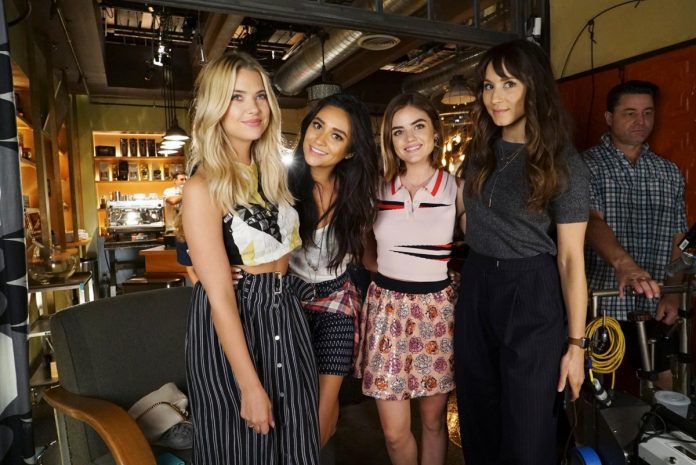 With two episodes left before season 6 of Freeform’s thriller series “Pretty Little Liars” comes to a close, spoilers have it that the girls will plot to take down their stalker as they get busy for the upcoming elections.

In an exclusive photo shared by TV Line, the girls are gathered together presumably to form some sort of plan to attack and based on their expressions, Hanna seems to confide a particularly interesting bit of information.

Aside from taking the matter on their own hands, showrunner Marlene King recently divulged that someone from Rosewood actually has a twin and that person will make an appearance before the current run ends. “The beginning of the biggest reveal of all starts in the 6B finale. The story then explodes after that!” she tweeted.

Meanwhile, in the penultimate episode titled “Did You Miss Me?,” a recently released promo features Hanna and Lucas talking about the possible extension of their stay in town and giving it a second chance. There may be another danger waiting for Alison while Aria and Ezra move froward with their book.

The full synopsis reads, “After Alison is confronted with a sudden, mysterious jeopardy, the Liars decide to take things into their own hands for a counterattack. Hanna and Caleb work together to develop a plan to come face-to-face with the tormentor. Emily and Spencer team up to investigate if Mona had any involvement with the murder. Aria and Ezra continue to work on the book though it might be more difficult than anticipated. Meanwhile, Ali encounters an unexpected visitor.”

Moreover, during the finale dubbed as “Hush, Hush, Sweet Liars,” the stalker will threaten to kill all of them if they do not disclose who killed Charlotte. Hanna will become the bait to lure the villain in revealing his or her true identity.

Episode 19 airs on March 8 at 8pm EST on Freeform (previously ABC family) while the finale will be released on March 15 at the same time.