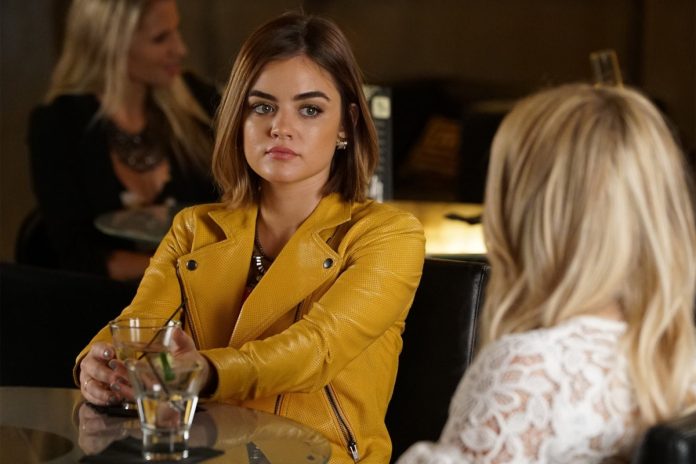 Back at the start of season 6B, Aria returned home to Rosewood with her life all figured out as she has a good job, a co-worker that became her boyfriend, and Ezra far from her mind. But as the narrative progressed, the two crossed paths again. Although Aria and Ezra appeared to have rekindled their romance during the finale of season 6, the fate of their tryst is still not set in stone. Hale teased to TV Guide that Liam will still be in the running.

“When we come back Aria is still with Liam, who is a long-time boyfriend, [but] Aria can’t get Ezra off her brain, ” she said, further hinting that, “You get to see a little bit of a love triangle and you get to see who she chooses,” which seemed to have given Ezria shippers some hope that their favorite couple may have a happy ending.

In a separate interview with E! Online, Hale revealed that she is also a fan of the former lovers and believes that their electric connection is still there. When it comes to the odds of the characters reuniting, “I think there’s always a chance. There’s that undeniable chemistry between the two of them,” she mused.

Harding also told the news outlet that he is hoping the duo will get back together someday. However, he cautiously added, “We’ll see what happens.”

Meanwhile, Aria will be pre-occupied with Hanna’s (Ashley Benson) disappearance when the first installment in the new season titled “Tick Tock, Bitches” premieres in the small screens.

The synopsis reveals that after Hanna’s shocking abduction by the culprit codenamed “Uber A,” the Liars and friends will desperately race against the clock to save one of their own. The only way to do so is to hand over evidence of Charlotte’s real murderer to the abductor.

The girls must also decide which lines they are willing to cross. Season 7 of “Pretty Little Liars” is slated to air on Tuesday, June 21 at 8 P.M. ET.

Days of Our Lives spoilers: Justin and Adrienne headed for splitsville?...