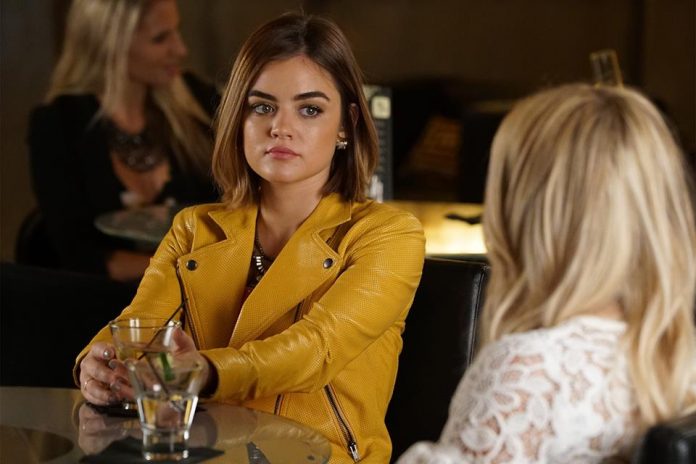 It is no secret that when the Liars came home to Rosewood after five years, their pasts were eventually going to collide with their present lives. This is exactly what Lucy Hale’s Aria is facing when the newest installment of “Pretty Little Liars” gets back on the air.

Aria had been having a pretty good life when things suddenly took an unusual turn which led to her being stuck in her hometown. Despite finding love once again with Liam (Roberto Aguire), her reunion with former lover Ezra (Ian Harding) has been constantly on her mind and Hale shares that her relationship woes will have its resolution in season 7.

“When we come back Aria is still with Liam, who is a long-time boyfriend, [but] Aria can’t get Ezra off her brain. You get to see a little bit of a love triangle and you get to see who she chooses,” Hale told TV Guide earlier this month.

The 27-year-old actress has been openly rooting for her character to get back with her ex-flame as she feels that they are meant to be. However, this does not necessarily mean that the narrative of Aria’s love life will end as it is.

Aside from the romance lines in the teen thriller, fans can expect that the seventh and final season of the show will tie up all loose ends in the series. In fact, when “Pretty Little Liars” premieres their brand new chapter, the story will immediately tackle “Uber A” and the uncertain future of Hannah, which was left hanging back in season 6.

“After Hanna’s shocking abduction by ‘Uber A,’ the PLLs and company desperately race against the clock to save one of their own. The only way to do this is by handing over evidence of Charlotte’s real murderer to ‘Uber A.’ In order to do so, the girls must decide what blatant lines they are willing to cross that they have never breached before; and once they cross that line, there is no turning back.”

'The Bold and Beautiful' news, spoilers: Thomas in the spotlight as...