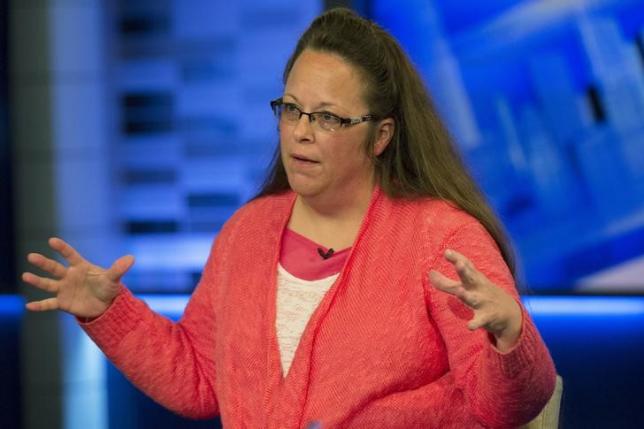 A Kentucky county clerk who had been jailed for refusing to issue marriage licenses to gay couples secretly met Pope Francis during his visit to the United States last week, a meeting she called greatly encouraging.

The Vatican confirmed the pope’s meeting in a brief statement on Wednesday.

Rowan County Clerk Kim Davis and her husband met the pope during the Washington leg of his U.S. visit, she and her lawyer told American media.

With the issue of same-sex marriage dividing Americans, the pope’s meeting with Davis and Francis’ comments on Monday may further embolden local officials across the United States who have said they will not issue marriage licenses to gay couples.

In Texas, Alabama and elsewhere a number of clerks and judges who stated their opposition to gay marriage have thrown up roadblocks to the unions.

Alabama Probate Judge Nick Williams said he would be willing to follow Davis. “Absolutely, I feel the same way. This is a cause worth standing up for,” said Williams, who ordered his deputies in Washington County not to issue any licenses at all since the court’s June decision.

The pope, returning home from a 10-day trip to the United States and Cuba on Monday, said government officials had a “human right” to refuse to discharge a duty if they felt it violated their conscience.

The U.S. Supreme Court made same-sex marriages legal across all 50 states last June.

Davis’ attorney, Mat Staver, told CBS News, “The fact that (the pope) met with Kim Davis sends a message that he is someone who stands with those individuals who are standing up for their religious convictions, that religious freedom is a worldwide message that the pope wants to convey.”

Gay activists reacted harshly to the meeting. “It’s nothing short of appalling that the Vatican would turn its back on countless LGBT members and families by lending its support to someone who has brought so much pain to LGBT families,” said Sarah Kate Ellis, president and CEO of GLAAD, a gay and transgender media monitoring group.

The plaintiffs who sued Davis in federal court indicated the pope’s meeting has no legal effect. “The pope is not an American citizen, and he is not a member of our government. He is entitled to meet with whoever he likes and have any opinion he wants to have,” Joe Dunman, an attorney representing the plaintiff couples suing Davis, said in a statement.

The Davis couple traveled to Washington and met the pope at the Vatican embassy last Thursday, ABC News and CBS News reported.

“It was really very humbling to even think that he would want to, you know, meet me or know me,” Davis told ABC. “I put my hand out, and he grabbed it, and I hugged him, and he hugged me and he said, ‘Thank you for your courage’.”

“He told me before he left, he said, ‘Stay strong.’ That was a great encouragement,” Davis said.

Davis said knowing that the pope agreed with what she was doing “kind of validates everything.”

ABC reported that the pope gave Davis a rosary, which she plans to give to her Catholic parents.

The Vatican has not yet released pictures and it was not clear if they would.

Neither Davis nor Staver could be reached for comment.

Davis was jailed for five days in September for refusing to comply with a judge’s order to issue the licenses in line with a U.S. Supreme Court ruling.

Davis has said her beliefs as an Apostolic Christian prevent her from issuing marriage licenses to same-sex couples. Her church belongs to a Protestant movement known as Apostolic Pentecostalism.

To keep a low profile, Davis went to the Vatican embassy in a sports utility vehicle with her hair in a different style than her normal look, Staver told CBS.

Conservative Christians, including some Republican presidential candidates, have said Davis is standing up for religious freedom.

But the American Civil Liberties Union, which went to court to ensure same-sex couples can obtain marriage licenses in Rowan County, has argued she has a responsibility as an official to issue the licenses, regardless of her views.

The ACLU, in papers filed on Sept. 21 with the judge hearing the case, asked the court to require Davis to stop making alterations to the licenses, such as removing any reference to the Rowan County clerk’s office.

Pope Francis is enjoying strong approval ratings from Americans, according to an Ipsos/Reuters poll conducted Sept. 21-28, before the meeting with Davis was disclosed.

According to the poll, 73 percent said they strongly agreed or agreed somewhat with a statement by the pope, “If someone is gay and searches for the Lord and has good will, who am I to judge?” Many Catholics have interpreted the comments as a softening of the Church’s hardline stance.