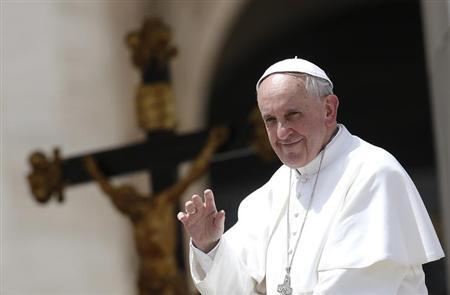 Pope Francis opens up about his views on the controversial issues in the Catholic Church in a book-length interview published Jan. 10.

USA Today reports the pontiff sat down with Italian journalist Andrea Tornielli and talked about his stand on gay Catholics, marriage annulments, and prisoners. The book, titled “The Name of God is Mercy,” is in time for the Vatican’s celebration of the Holy Year of Mercy, which started in December.

On gay Catholics, the pope said people “should not be defined only by their sexual tendencies.”

“Let us not forget that God loves all his creatures and we are destined to receive his infinite love,” the Roman Catholic leader said in the interview’s English translation. “I prefer that homosexuals come to confession, that they stay close to the Lord, and that we pray all together. You can advise them to pray, show goodwill, show them the way, and accompany them along it.”

According to Catholic teachings, those who cohabit outside of holy matrimony are considered as committers of grave sins and are not allowed to receive the Holy Communion. Pope Francis admitted he has a heart for those who suffer from failed marriages and have found love with another.

“I have a niece who was married to a man in a civil wedding before he received the annulment of his previous marriage. They wanted to get married, they loved each other, they wanted children, and they had three,” he shared.

According to the pope, the man was considered as “religiously mature” as he went to Mass every Sunday and confessed.

Pope Francis also admitted he often claims responsibility for those who are in prison.

Visiting the gates of a prison may have made Pope Francis feel less “superior,” but he gets his “shocking” consolation from the life of St. Peter: “He betrayed Jesus, and even so he was chosen.”