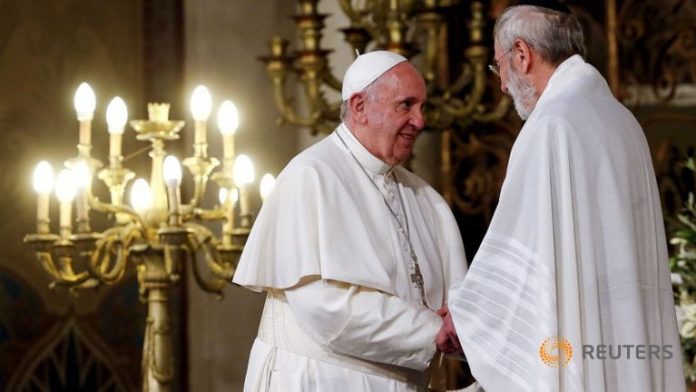 On Wednesday, a group of Muslims went to the Vatican to hand Pope Francis an invitation to visit the Mosque in Rome.

Imam Yahya Pallavicini from the Islamic Community of Italy, COREIS, and Abdellah Redouane, director of the Islamic Cultural Centre of Italy, were among the delegation received by the pontiff.

Fr. Federico Lombardi, SJ, the director of the Holy See Press Office, told the Vatican Radio that the Catholic leader has studied the invitation and has “come to a decision,” although he “would be cautious about a date.”

Any Mosque visit dates that are released in the media, he said, are “without foundation.”

“You are, in fact, our older brothers and sisters in faith,” the pope said in his speech in front of the Jewish community, as well as representatives from the government, international Jewish organizations and the state of Israel.

He added that for Christians “to understand themselves, [they] cannot fail to make reference to the Jewish roots, and the church, while professing salvation through faith in Christ, recognized the irrevocability of the ancient alliance and constant and faithful love of God for Israel.”

Addressing the reconciliation between the Catholics and the Jews 50 years ago, Francis said this should set as an example to all faiths across the world.

“The violence of man against man is in contradiction with any religion worthy of the name, and in particular with the three great monotheistic religions,” he continued. “Every human being, as a creature of God, is our brother regardless of his origins or religious belief.”