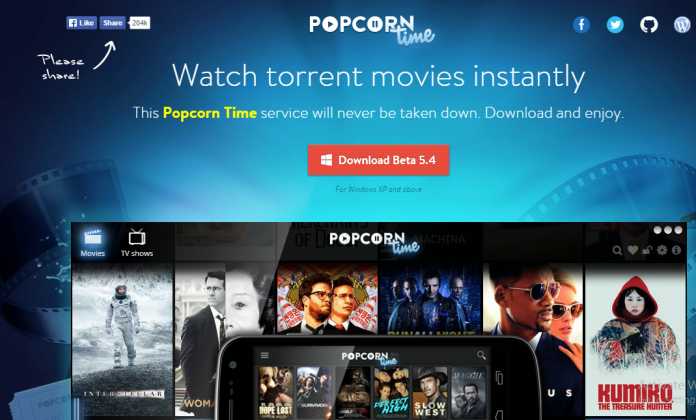 Popcorn Time, an online streaming application that uses open source code, has been experiencing ups and downs on its website over the week.

BREIN, a Dutch anti-piracy group has tracked down two Popcorn Time developers last week. “Since the recent action by the MPAA against popcorntime.io, which took the website offline, various parties are breathing new life into the software, as were these two Dutch individuals,” said the officials from the said group, noted Torrent Freak. The group has asked both men to sign a settlement agreement to stop helping the online streaming application. Both Dutchmen will receive a fine of 2,000 Euros a day should they push through with their previous actions.

However, about four days after, Tech Times reported that the site is once again up. As an open source-backboned software, the code of the application can be constantly retrieved and redistributed. Additionally, it seems that the two Dutchmen who signed the agreement with BREIN were non-critical members who will make or break the company.

The moderator of Popcorn Time posted on Reddit, “They had to delete all their accounts, links, and stop working on the community version immediately,” pertaining to the two Dutchmen who signed the settlement agreement. “This will not stop us in any way, but we will not credit any of the people involved to protect them,” they added. The moderator also mentioned that new links and fixes are available for Windows, Mac, and Linux users.

Nonetheless, China Topix reported that Popcorn Time is once again down. It is unclear if BREIN is still the group behind this, but it is highly likely that they are. At this point, the same report pointed out that only two sites remain offering the same services, namely, The Pirate Bay and Kickass Torrent. However, Kickass Torrent is experiencing bugs and even security issues as Google has already tagged the website as a risk site.

Still, Popcorn Time remains confident with its status, as it clad the words on one of its site, “This Popcorn Time service will never be down.” It also advised its users to “download and enjoy.”