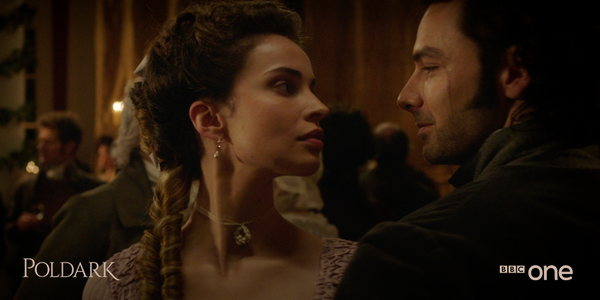 The infamous rape scene in the “Poldark” novels will not be seen in the small screen adaptation of the books, as it was apparently axed by BBC. The sequence, which was supposed to air sometime in the second season of the show, has been replaced by a lovemaking scene still involving Ross (Aidan Turner) and Elizabeth (Heida Reed).

The brute scene originates from a novel in Winston Graham’s “Poldark” series titled “Warleggan,” which was written in 1953. Apparently, the British channel deemed that it was unnecessary to include the scene as part of the story arc in their version of the historical novels. It can be remembered that the same sequence was part of the 1970 adaptation of the narrative, also by BBC.

The original iteration of the story was that Aidan forced Elizabeth into bed with him after he found out that she will be marrying his cousin the following week. Turner, however, explained to The Sun that instead of an aggressive attack, it would be more of a “consensual” thing which will spiral into a full-blown affair.

While the tweak in the series won’t paint Ross as a predator, Turned added that fans should not look at his character as a perfect hero.

“He’s heavily flawed. He isn’t just this legend who rides in on a horse and feeds the poor,” he warned. “He can be quite mean and callous, and single-minded and selfish. It would be boring to play a character who’s just a do-gooder. He makes mistakes and realises them.”

As for Mammoth Screen, who is in charge of producing “Poldark,” a spokesperson said, “Winston Graham’s version of events is open to interpretation. Ours is not. Many fans haven’t read the books and don’t appreciate spoilers, so we invite all viewers to watch the episode when it comes out and then make up their own mind?.”

Meanwhile, an anonymous tipster told the same publication that the decision to cut the scene is part of the show’s effort to cater to all viewers and prevent any backlash from them. “Ross is a hero and times have changed since the 1950s and 1970s,” the source explained. “The new series reflects that in a way that keeps Ross Poldark as the romantic hero that fans want.

Season 2 of the period drama “Poldark” is due for its premiere sometime next month on BBC One.