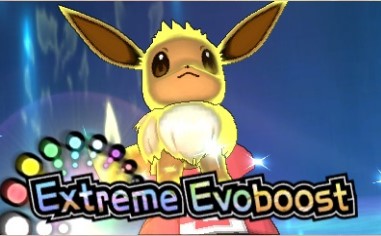 Is Eevee getting a new evolution in “Pokmon Sun” and “Pokmon Moon”? According to some reports, that seems to be the case.

This theory first came out on Otakukart, and the author of the piece pointed out that when Eevee uses its Z-Move, Extreme Evoboost, nine colored balls will appear. Check out the image above.

It was noted that each colored ball represents every one of Eevee’s evolutions. Red for Flareon, yellow for Jolteon, green for Leafeon, blue for Vaporeon, light blue for Glaceon, purple for Espeon, pink for Sylveon, and dark gray for Umbreon. However, one colored ball is unaccounted for the white one to the left of the red ball. That’s a good observation.

The article said that the ball seems to give off the color of a Steel-type Pokmon, which is grayish. It should be noted, though, that only eight Pokmon appeared in the video featuring Eevee using its Z-Move. So, Eevee may not be getting a new Generation VII evolution.

The author mentioned that there is a chance that The Pokmon Company is hiding the fact that Eevee has a new evolution, or maybe the new evolution isn’t part of the Z-Move. Anyway, “Pokmon Sun” and “Pokmon Moon” are going to come out on Nov. 18, so trainers don’t have to wait long to know if this is true. Until it is confirmed, readers are advised to take everything with a grain of salt, so this is just a theory for now.

In other news, The Pokmon Company continues to unveil more Pokmon in the lead-up to the game’s release. Last week, eight more Pokmon were introduced in a trailer. The video reveals that Type: Null evolves into Silvally, while Jangmo-o evolves into Hakamo-o and then Kommo-o. Furthermore, Bounsweet will evolve into Steenee and then Tsareena, while Cutiefly evolves into Ribombee. Grimer and Muk also have Alolan forms in “Pokmon Sun” and “Pokmon Moon.”