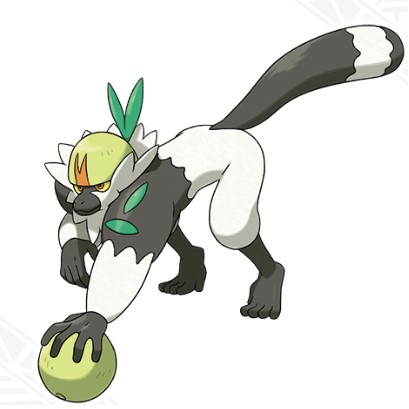 As the release date for “Pokmon Sun” and “Pokmon Moon” draws closer, The Pokmon Company continues to add new pocket monsters to their upcoming game and this time two primates will be joining the ever-expanding roster.

Here is a look at the official trailer introducing Passimian and Oranguru. The trailer also reveals that Rockruff can evolve into two different forms.

According to the official Pokdex, the monkey-like Passimian lives in groups of 20 to 30 with one leader. These Pokmon are exceptionally good when it comes to teamwork since they usually band together to train and search for food. The Passimian has an ability called Receiver, allowing the Pokmon to gain the ability of an ally who faints in battle.

The Oranguru, as its name suggests, looks like an orangutan. While the Passimians live in groups, these Pokmon prefer to live alone in the deep forests. The Oranguru is quite human-like since it can use items that only humans can use; there are even rumored sightings of Oranguru using PokBalls.

This Normal/Psychic-type Pokmon has the ability to use Inner Focus/Telepathy. It is also the only Pokmon that can learn to use the move Instruct. The move allows Oranguru to pick a target, and the selected target will get the chance to immediately use its most recent move once again.

As shown in the trailer, Rockruff gets to evolve into two different forms. Both evolutions are called Lycanroc; however, they have different Midday and Midnight forms. The Midday form has the ability to use Keen Eye/Sand Rush, while the Midnight form can use the Keen Eye/Vital Spirit ability.

Meanwhile, are they seriously going to consider making a Harambe Pokmon if a petition on Change.org gains enough vote? Nintendo and The Pokmon Company have yet to comment on this petition, so people who want the gorilla to appear in the game will have to continue crossing their fingers and hope their petition reaches the developer’s ears. Harambe was the gorilla killed at the Cincinnati Zoo last May.

“Pokmon Sun” and “Pokmon Moon” will hit the shelves on Nov. 18, exclusively on Nintendo 3DS.