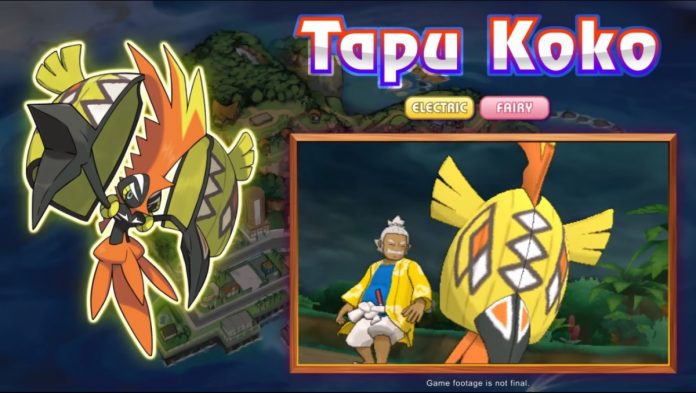 A new trailer for “Pokmon Sun” and “Pokmon Moon” has been released and it introduces the new Pokmon that will be available in the upcoming games. The trailer also contained hints of what seems to be a new Legendary Pokmon.

One of the new Pokmon that was shown in the trailer was Tapu Koko and he was labeled as the guardian of Melemele Island. The Pokmon’s type is a mix of fairy and electric. It is said that the new version of the game was inspired by the islands of Hawaii and Tapu Koko’s appearance seems to reflect this.

The trailer also showed a bug type Pokmon called Grubbin which evolves into Charjabug, a bug and electric type Pokmon. Charjabug looks like a bug with the design of a battery and also has sharp jaws. Charjabug evolves into Vikavolt, who comes with fire-type moves.

Drampa was also shown; it is a normal and dragon-type Pokmon which is said to be a first. The Pokmon is equipped with an ability called Berserk where it can raise its Special Attack stats once the health of the Pokmon drops below 50 percent.

A water and psychic type Pokmon was also revealed in the trailer Bruxish. The Pokmon looks like a fish with different colored scales. Its Dazzling ability prevents opponents from using their first top move, which is pretty useful for tournaments.

Another electric mouse type Pokmon was unveiled and its name is Togedamaru. It is an electric and steel type Pokmon.

Finally, the most interesting introduction in the trailer was Zygarde. The Pokmon is a dragon and ground type Legendary Pokmon who comes with different Formes.

“Pokmon Sun” and “Pokmon Moon” will be released on Nov. 18, exclusively for the Nintendo 3DS.