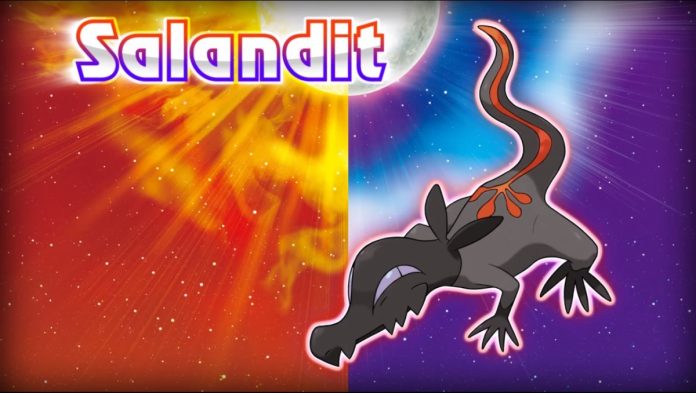 Previously released trailers for “Pokmon Sun” and “Pokmon Moon” have already featured some of the new Pokmon that will be included in the new video games of the franchise. Now, the developers have released another trailer which introduces a new Pokmon. It seems that this new Pokmon deserves its own trailer since this new creature has a unique ability, even though it is not a Legendary Pokmon.

The new Pokmon is called Salandit, and the design of the creature is black with a streak of red along its spine. The face of the Pokmon also has a very mischievous expression. Aside from its physical appearance, it is unique because it is mixed with two types of elements which are the Poison type and also the Fire type. This is probably the reason why Salandit is one of a kind.

If that does not make the Pokmon unique enough, he is equipped with an ability called Corrosion. The ability gives an advantage to the Pokmon Trainer since it can poison every Pokmon in the Pokdex, even the Steel and Poison types. Salandit will surely be useful during tournaments and competitions as it will give opponents a hard time in dealing with the effect of his abilities.

Specific details for Salandit are now available on the official website. It is mentioned that, “Salandit emits toxic gas, together with flames, from the base of its tail. This poisonous gas has a sweet smell, and anyone who unknowingly breathes it in will become dizzy. Salandit is not a very powerful Pokmon, but its cunning nature allows it to battle fiercely by throwing its opponents off balance.”

There were already previous Pokmon that were also revealed in another trailer such as Tapu Koko, Bruxish, Vikavolt, and Drampa.

“Pokmon Sun” and “Pokmon Moon” will be released on Nov. 18, exclusively for the Nintendo 3DS.

Watch the trailer of Salandit below:

'Fast and Furious 8' news: Paul Walker won't feature in next...