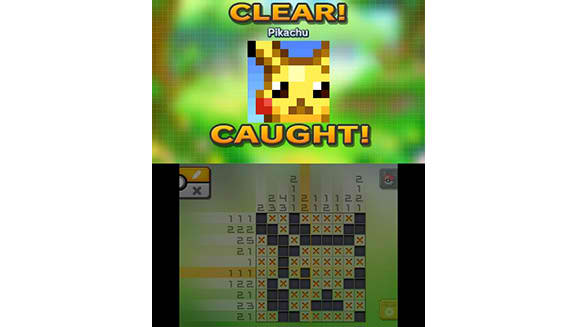 Last week, Pokmon announced through its Twitter account that “Pokmon Picross” will be coming to the eShop of Nintendo today. The tweet said, “US Trainers: #Pokemon Picross arrives on Nintendo eShop on December 3!”

The game seems to be well-received by fans as most of them responded in anticipation on the same page. Meanwhile, fans from other regions are dejected as they are also asking for a version for their country. There are others, however, who are unhappy with the spin-off and are still asking for another game, “Pokmon Z.”

“Picross” is a game that involves arithmetic and logic that hooks players despite the lack of its usual fancy presentation and icon. Adding to it the Pokmon factor, “Pokmon Picross” will not just unveil characters from the popular game but also give players the chance to capture Pokmons and add them to their collection of creatures.

Additionally, the game involves a twist where players can use the skills of the Pokmon characters in solving the puzzle. For example, once captured, players can use the Hyper Scan power of Lucario in scanning the grid and correcting the order of the squares, reported Venture Capital Post. On the other hand, players can also use the Blue Force power of Squirtle to change the colors on the hint blocks to blue to empty rows.

The gameplay involves the concept of other popular games where players need to wait for some time to recharge the credits after its limited life has been exhausted. For those who do not want to stop, the game has a currency that can be used to refill the “lives.” It has more than 300 puzzles to solve, with an option for more advanced stages that includes Mega-Evolved, Legendary, and Mythical Pokmons from Pokmon Omega Ruby and Pokmon Alpha Sapphire.

The game is a free-to-play title for Nintendo 3DS and already available on Nintendo’s eShop today.