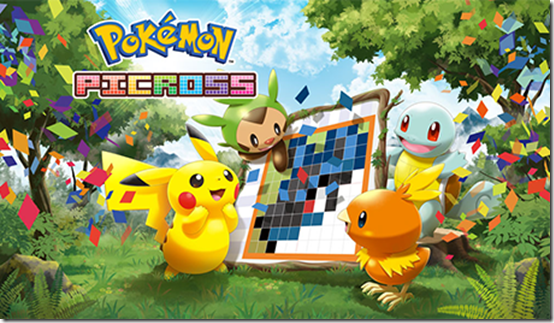 The “Pokmon Picross” game is a casual puzzle solving game wherein players have to complete puzzles in order to reveal a portrait of a Pokmon. They can catch that Pokmon afterwards. The game will be made available for download for free on the Nintendo 3DS family of handheld consoles via the Nintendo eShop.

In the game, players will have to solve a puzzle which can be done by taking note of the hint numbers that can be seen on the tops side of each column and on the left side of each row. Players will have to guessor better yet, perfectly deducethe number of squares that has to be filled on a certain row. As players reveal more squares, they will eventually be able to solve the rest of the image to reveal the Pokmon behind the puzzle.

However, collected Pokmon will not remain in the player’s inventory. Each Pokmon has a wide range of skills that can be utilized in gameplay to make any puzzle easier. For example, players can use the “Blue Force” skill of Squirtle to change the color of hint numbers to blue on rows with squares that are guaranteed fillable. Lucario’s “Hyper Scan” skill, on the other hand, will automatically fix incorrect squares in the puzzle.

Once a Pokmon’s skills is used, it will be “out-of-power” until a certain rest time passes. Afterwards, players can use the Pokmon in levels again.

Aside from familiar faces, all Mega-Evolved Pokmon that appeared on “Pokmon Omega Ruby” and “Pokmon Alpha Sapphire” will likewise appear to either assist or challenge the player on some of the 300 levels.

“Pokmon Picross” will be available on the Nintendo eShop on Dec. 3.