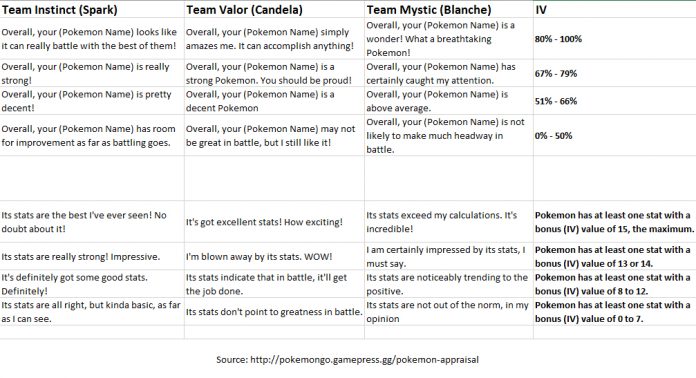 The latest “Pokemon Go” update introduced the new Appraisal feature, which is really useful in determining the individual value (IV) of a Pokemon.

The new appraisal feature in “Pokemon Go” now allows the team leader to assess the Pokemon. Depending on the team of the player, Blanche, Candela or Spark will pop up to give comments regarding the IV, stats, best quality and sometimes, its size.

For those unfamiliar with IV, it is calculated based on the health points (HP) and defense and attack capabilities of a Pokemon, Weekender reported. These are stats that are native to a Pokemon and do not play into the combat points (CP).

Previously, it can only be calculated using third-party apps or websites, such as PokeAssistant, but with the Appraisal feature, players can now have a general idea if their Pokemon is worth spending a candy or stardust on.

The new feature is confusing at first, according to Forbes. The statements are all somewhat positive and does not really give much insight about the real strength of the Pokemon. There are also cases where a monster with high CP do not elicit good responses from the team leader.

Furthermore, not all players actually know about IVs, so many might not understand the purpose of this feature at all.

That said, the automated responses of each team leader are different, but equally vague. Thankfully, the folks over at GamePress compiled the statements and their corresponding meanings, seen below.

According to Polygon, determining a Pokemon’s IV is crucial in getting competitive. As of now, the only way players can fight others is by battling a gym leader to conquer that gym. Knowing the Pokemon’s capabilities will allow for a more strategic planning before going into battle, which will then ensure a higher chance of success.