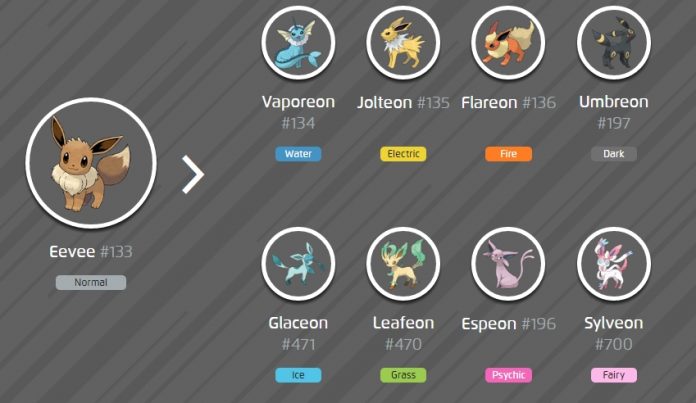 Eevee can currently evolve into three forms in “Pokemon Go,” but two more will soon be added when the Generation 2 Pokemon come to the augmented reality (AR) mobile game.

Eevee is a normal-type Pokemon, which borrows its appearance and some traits from a fox. In “Pokemon Go,” it can evolve into Vaporeon, Jolteon or Flareon, which can be completely random or controlled. When the AR app is updated with the Gen 2 Pokemon, two more of its evolved forms are coming with it, namely Espeon and Umbreon.

According to SlashGear, players can get an Espeon or Umbreon depending on what time of the day the Eevee is evolved. In the past “Pokemon” titles, Eevee turns into an Espeon if leveled up during daytime and into an Umbreon when it is nighttime.

It is unknown how “Pokemon Go” will be able to play it out, but it is speculated that players can also control this by naming their Eevee certain names. For example, users can choose which of the three current evolution they want Eevee to turn into by naming it Rainer for Vaporeon, Sparky for Jolteon and Pyro for Flareon, Twinfinite reported.

Niantic head John Hanke confirmed this to be true, so naming an Eevee any of the three mentioned above is sure to give the corresponding evolution 100 percent of the time.

There are also talks of the game tracking what time of the day it is to determine which of the two Gen 2 evolutions the Eevee will evolve to. The mobile app can currently determine if it is nighttime or daytime so it can spawn Pokemon according to the time. For example, Gastly is a nocturnal Pokemon, so it should only appear at night.

As of the moment, there is no news as to when Gen 2 is coming to “Pokemon Go,” so players will have to save their Eevee for now if they wish to evolve to Espeon or Umbreon.