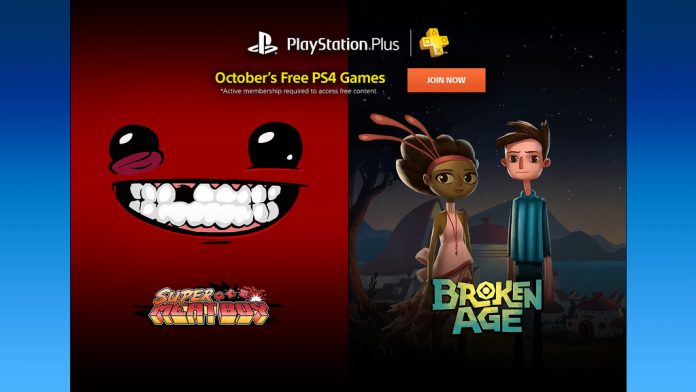 Another month, another set of free games exclusively available for PlayStation Plus members! For the month of October, six different titles available across all PlayStation platforms will be given out for Plus members.

Unlike for the month of September, the lineup of free games for October did not include a winner for another “Vote To Play” competition.

Along with the new games is the announcement that Driveclub PlayStation Plus Edition will no longer be a free download starting October 6.

First off is Super Meat Boy for the PS4 and the PS Vita handheld. The game puts players in the character of the minced meat Meat Boy, who is on a quest to save the love of his life, Bandage Girl, from the evil Dr. Fetus. The game is the successor to the 2008 hit flash game Meat Boy, and is developed independently by Team Meat. Traverse over 300 levels to save Bandage Girl.

Next is Broken Age, also free for the PS4 as well as the PS Vita. The game tells the seemingly unrelated story of two teenagersVella Tartine and Shay Voltaas they go about their separate adventures with the same goal to break free of the traditions dictating their lives.

On the other hand, Unmechanical: Extended, free for the PS4 and the PS3, is the extended edition of the 2.5D puzzle game, featuring new levels and bonuses that are not found on the original standard edition.

Chariot is another free game for the PS3, in which a brave princess and her suitor travel around carrying a funeral wagon, while fighting off bandits and collecting lot for themselves, all for the goal to bury the King’s remains in a worthy tomb filled with lots of gold.

KickBeat for the PS3 is a mixture of martial arts fighting and music, as players will have to fend off fighters from all directions in accordance to the beat of the music that is currently playing.

Finally, Kung Fu Rabbit comes for the PS3 and the PS Vita. Being the only survivor following the attacks on the temple of rabbits, a brave rabbit must now battle his way through enemies and obstacles to finally face the Universal Evil!

The new roster of free PlayStation Plus games will be available for download starting October 6.